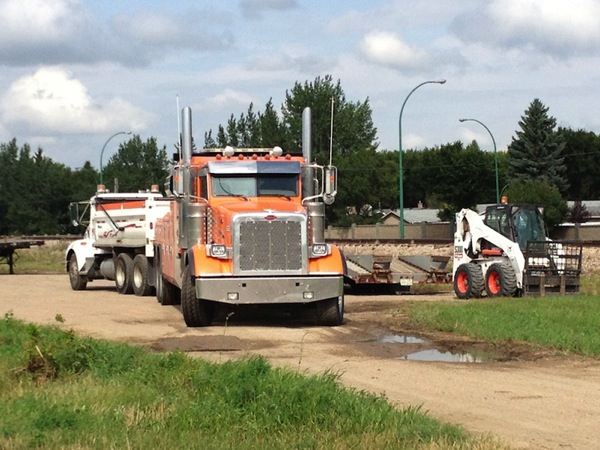 K3 Excavating truck being impounded by police, via CJME

Saskatchewan introduced tougher traffic laws on June 27 for distracted driving, with a first offence coming with a $280 fine. If a second distracted driving ticket is issued within a year, owners are subject to having their vehicle impounded for seven days, which is what happened to one of K3 Excavating’s company trucks.

One of Kevin Boychuk’s employees was issued his second distracted driving ticket in less than a year, which resulted in having a company truck impounded for seven days.

“He told me city police pulled him over for talking on his cellphone and they were towing the truck to the impound lot,”

Boychuk told CJME the tougher laws should penalize the vehicles belonging to drivers, and not companies, claiming the vehicle has caused his business to lose $2,500 in revenue in one day due to the impounded truck:

“When we’re not the offenders, we’ve done everything we can to make our employees aware of the policy and we’ve done nothing wrong as a company — my driver is a big boy, he’s got a registered vehicle, so take his vehicle don’t punish my company,”

The new driving law states police are to seize vehicles driven by offenders, regardless who it belongs to. According to Earl Cameron, the vice-president of SGI’s auto fund that covers the vehicle insurance segment, “In 2013 there were 31 deaths and nearly 2,000 injuries where distracted driving was a contributing factor,” which is why tougher legislation was enacted.

Cameron also noted the purpose of the law is to separate the risk (the driver) from the vehicle, in the same way police would deal with impaired drivers.

Boychuk argues the law should be changed, calling it “bad legislation.”

The bottom line is his driver was caught texting and driving. It’s unfortunate he just happened to be driving the company vehicle.

Earlier this week, the government of Ontario noted distracted driving fines are set to possibly increase to $1000, should an old driving bill successfully pass through the legislature. The Ontario Provincial Police says distracted driving is now the number one killer on the roads.