Ride-hailing apps such as Uber and Lyft aren’t coming to British Columbia anytime soon, as the provincial NDP government has yet again delayed the launch of ridesharing services, in what looks like another win for local taxi companies.

The change comes after the government received a new technical report from Dan Hara, a transportation expert. The report made a number of recommendations, such as increasing taxi fleets by 15 per cent immediately across the province, or 300 cabs in the Lower Mainland and 200 more throughout the rest of B.C.

“We know that people are frustrated and have been waiting far too long,” Trevena said, adding “it is important that we get this right.”

This year, new legislation will be tabled to allow services like Uber and Lyft, said Trevena. She expects companies to apply to the Passenger Transportation Board (PTB) by September 2019.

When Trevena was pressed by CTV journalist Mi-Jung Lee on whether she could guarantee the late 2019 date for ride-hailing in B.C., the Minister didn’t answer the question. She just reiterated the government’s plan to take its time to ensure safety for both drivers and passengers.

In an effort to keep ride-hailing companies like Uber and Lyft out of B.C, the Vancouver Taxi Association has struck a tentative agreement with wealthy Surrey businessman Monty Sikka to develop a ride-for-hire app called “Kater”, with 20% of the profits remaining with taxi firms, The Province is reporting.

But this plan was ultimately rejected by the province, as per recommendations by Hara. 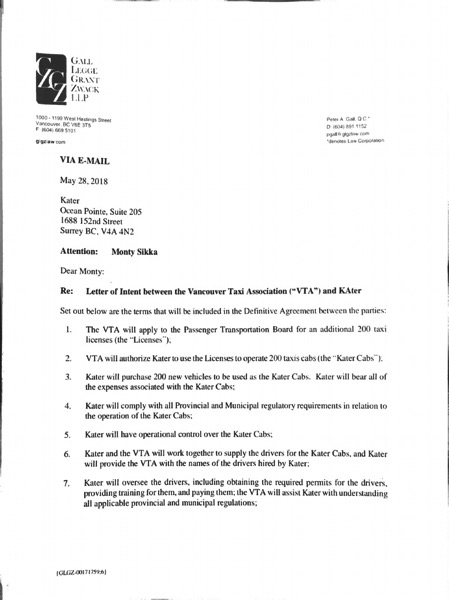 The deal outlined in a three-page “letter of intent”, calls for the licensing of 200 “Kater Cabs” which would operate like Uber cars.

According to the agreement, the rates charged by Kater Cabs will be the same as the rates charged by the VTA taxis. Carolyn Bauer, head of the taxi association, has confirmed the tentative deal and has said the taxi industry is asking the government to approve the Kater app. “Ride-sharing needs to come in and this is a made-in-B.C. solution,” she said.

However, a coalition supporting Uber and Lyft has reacted angrily to the idea.

“It would be very concerning if any government was seriously considering a proposal for a taxi ride-sharing monopoly,” said Ian Tostenson, president of Ride-sharing Now for B.C. “Backroom deals between the taxi industry and a politically connected company won’t do anything for British Columbians demanding new transportation options.”

B.C. is the last major jurisdiction in North America where ride-hailing services are still illegal.

The ruling NDP Party promised during their election campaign to bring ride-hailing to B.C. by the end of 2017. That promise was broken, while earlier this year, the government suggested ride-hailing could launch sometime in 2018. With the latest update from the Transportation Minister, residents will now have to wait until late 2019 to see Uber or Lyft arrive, but there are no guarantees in sight.