Google has today announced on its blog that it is testing a new YouTube feature that places two skippable ads back-to-back at the beginning of a video in an effort to provide an improved, distraction-free video watching experience. Viewers will have the option to skip directly to the content if they do not want to watch the ads. 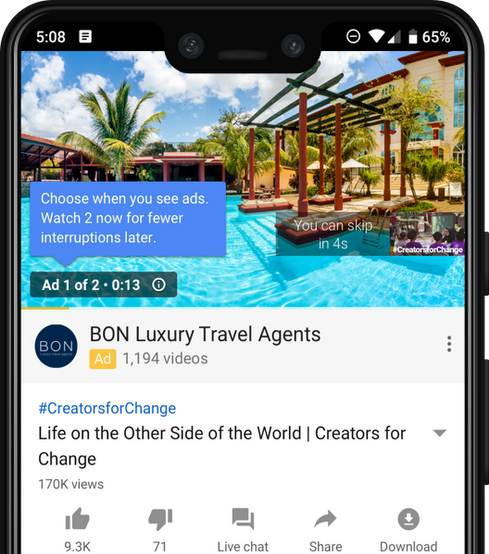 According to Google, a lot of viewers are sensitive to the frequency of ad breaks, especially during longer viewing sessions, in addition to factors like the length of ads. Research shows that fewer interruptions are correlated with better user metrics, including less abandonment of content and higher rates of ad viewing.

Why does this solution make sense? Because when users see two ads in a break, they’re less likely to be interrupted by ads later. In fact, those users will experience up to 40 percent fewer interruptions by ads in the session. Early experiment results also show an 8-11 percent increase in unique reach and a 5-10 percent increase in frequency for advertisers, with no impact to Brand Lift metrics.

The company plans to roll out two back-to-back ads or “Ad Pods” in videos on the desktop this year, which will be followed by mobile and TV screens later.