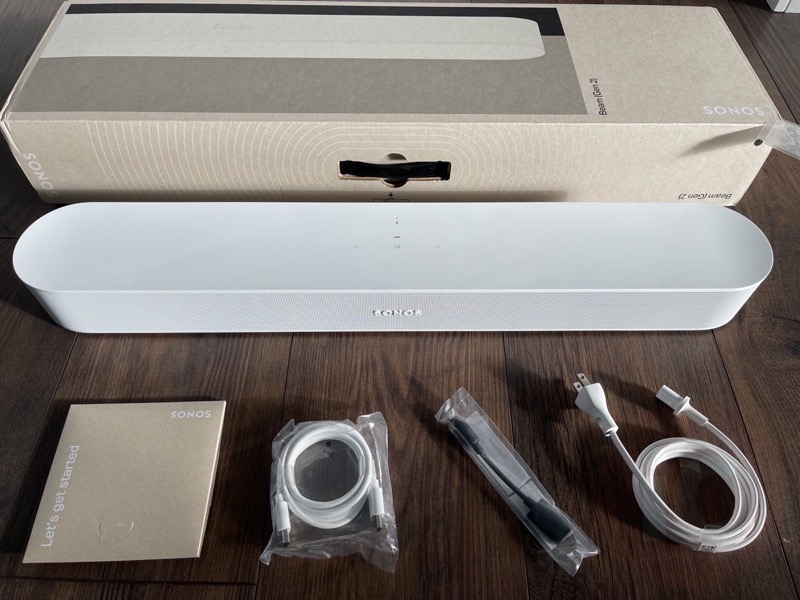 The Sonos unboxing experience is pretty good and comparable to an Apple product I’d say. This year, the company’s environmental impact sees 97% of the box made from sustainable paper. The only plastics inside are for the HDMI cable, optical audio adapter and a tab on the power cable. 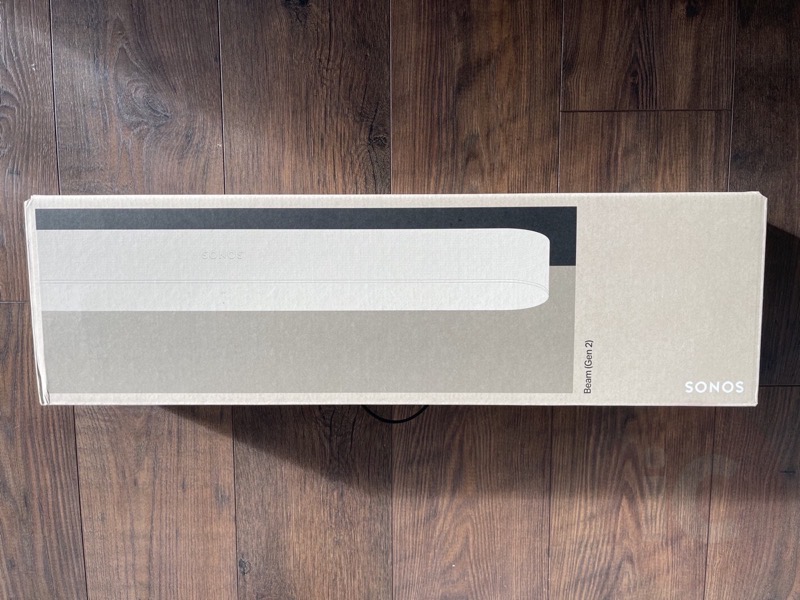 No scissors are needed to open up the Sonos Beam. Just tear this piece of paper away: 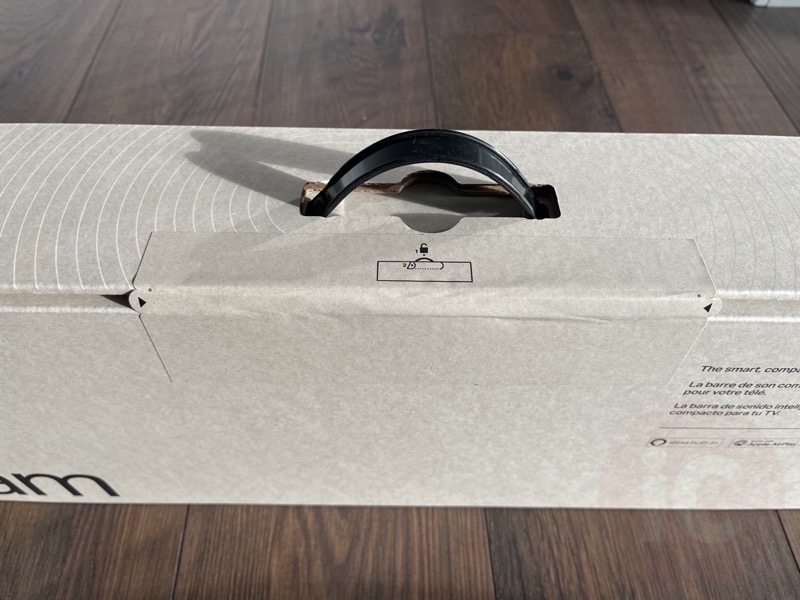 Inside, we see the Beam soundbar wrapped up like a present, which existing Sonos owners are familiar with by now: 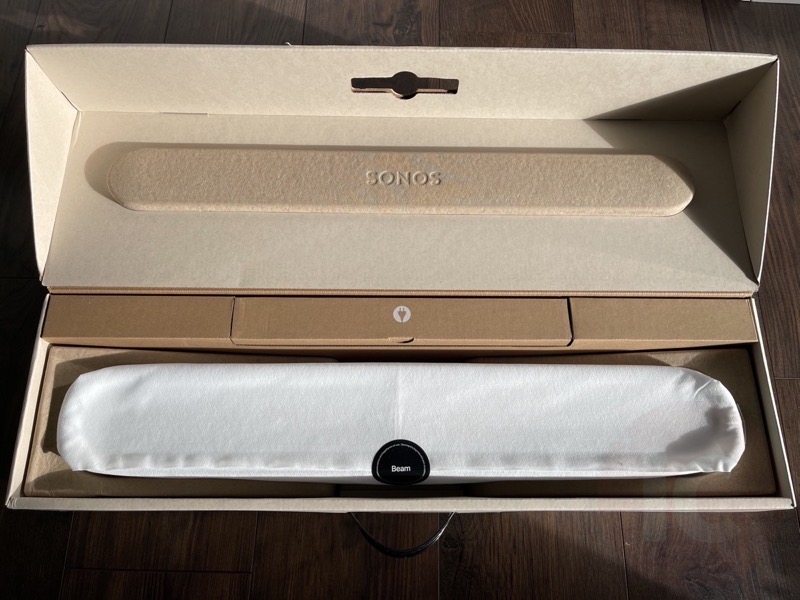 One of the biggest changes this year is the new polycarbonate grille, borrowing from the more expensive Arc; you can also see the same capacitive touch controls like its predecessor, to let you play, pause, skip, replay, mute the mics, and increase/decrease volume: 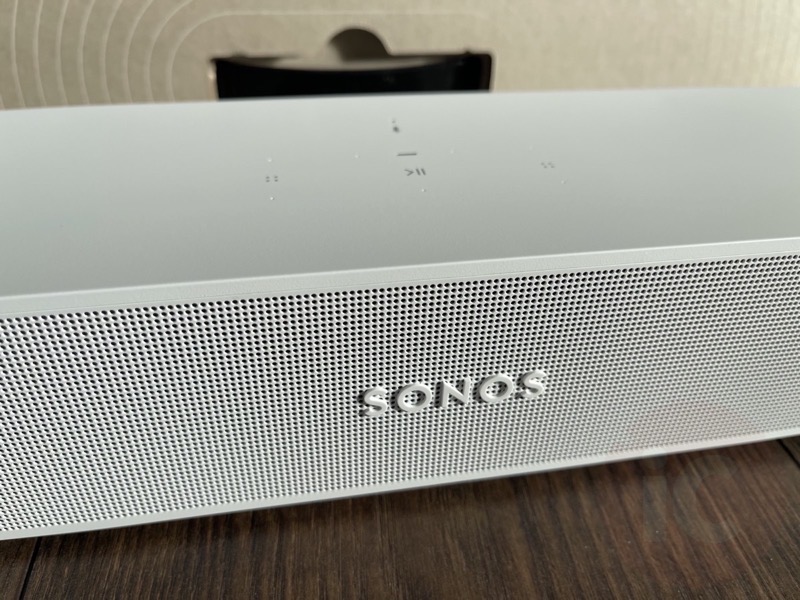 Also new in the second-generation Sonos Beam is colour-matching on the rear where ports are. The white version of the predecessor had this small panel in black: 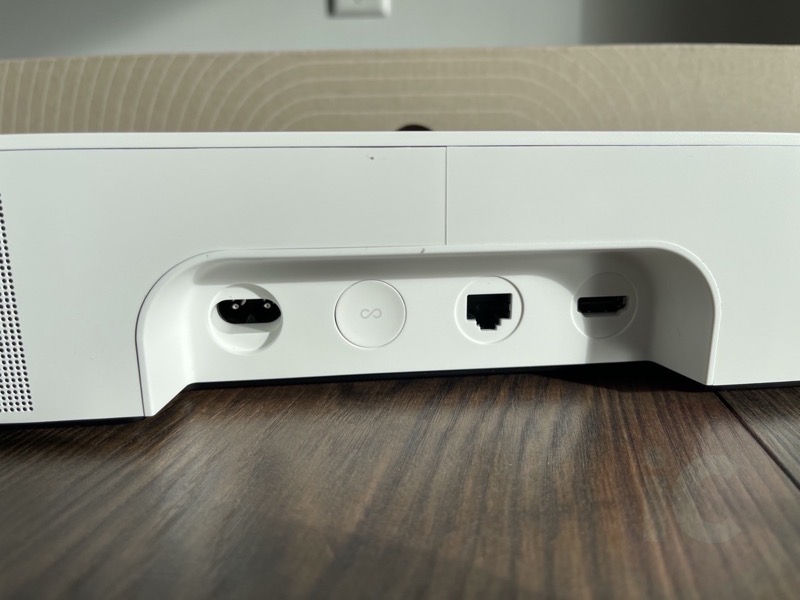 Here’s what the Sonos Beam looks like from the side: 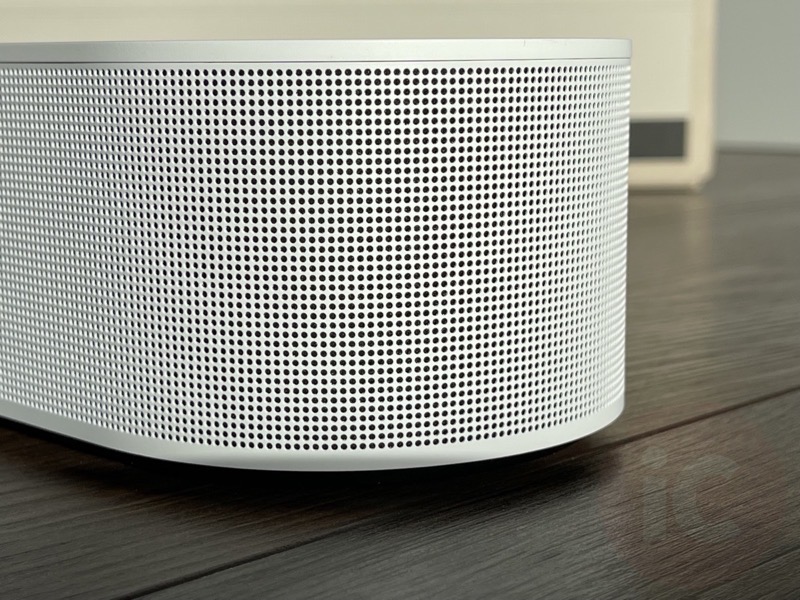 Here’s the underside of the Sonos Beam, which has rubber feet to hold it securely in place on your mantle or table. You can also see the screw holes for the optional wall mount kit, sold separately: 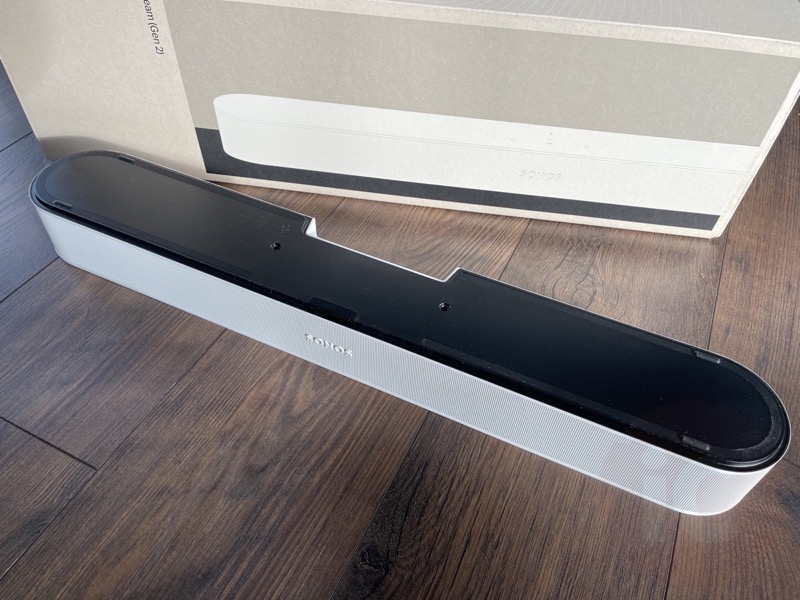 Here’s how the Sonos Beam (Gen 2) looks placed on top of the original Sonos Beam. The dimensions and design are essentially the exact same, aside from the new grille design in 2021: 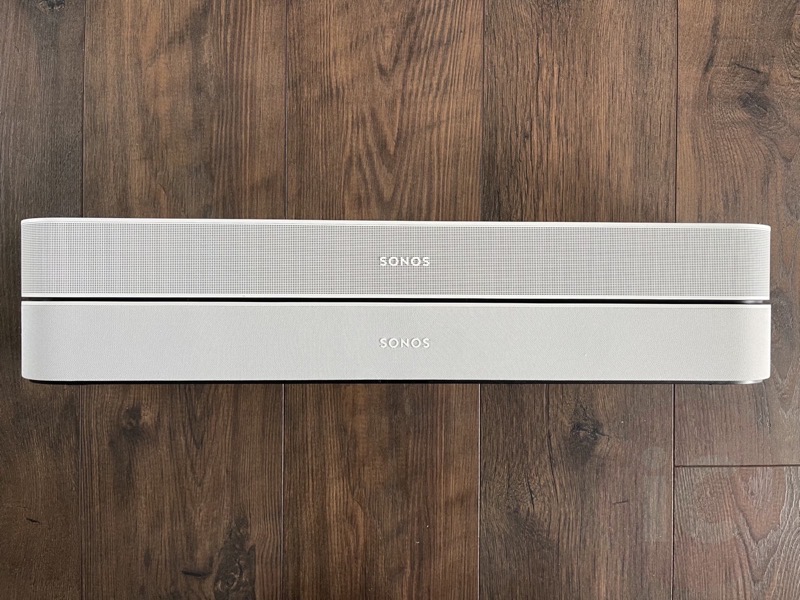 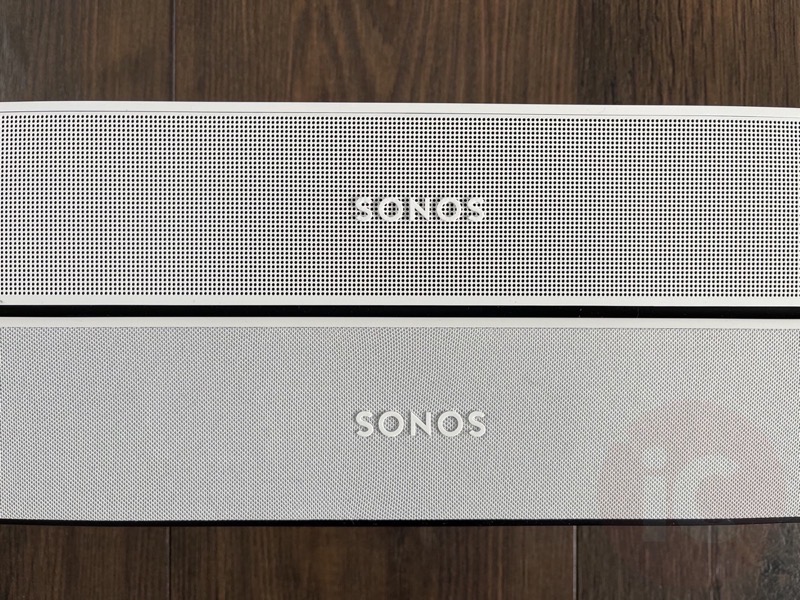 Here’s another picture comparing both the original Beam and Beam (Gen 2): 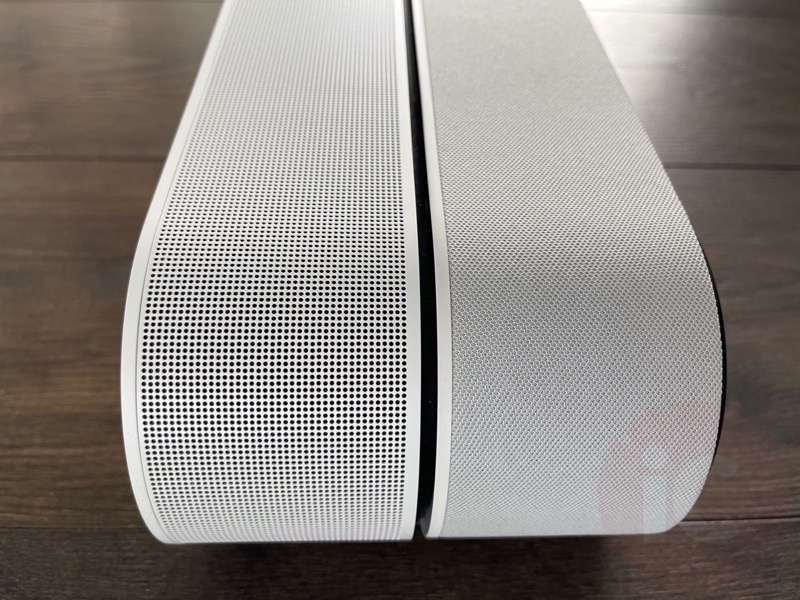 …and one more of the back of the new Beam with matching white cable cove, versus the original Beam; this year also brings a matching white power cable too: 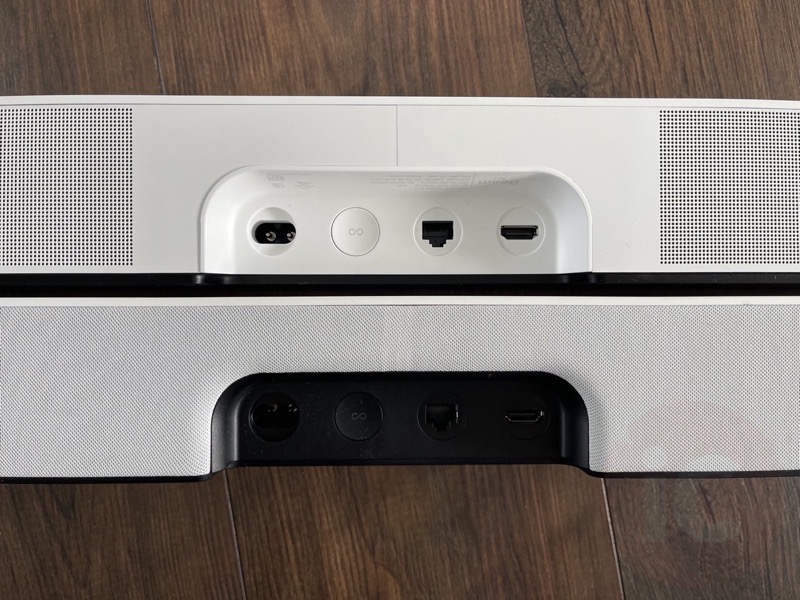 Setting Up the Sonos Beam (Gen 2)

If you have an existing Sonos system set up, adding the Sonos Beam is incredibly easy. Just plug in the new Beam and within the Sonos S2 app and follow the instructions. Once you tap ‘add’, the next step is to just tap your iPhone to the speaker as it leverages NFC as part of the set up. 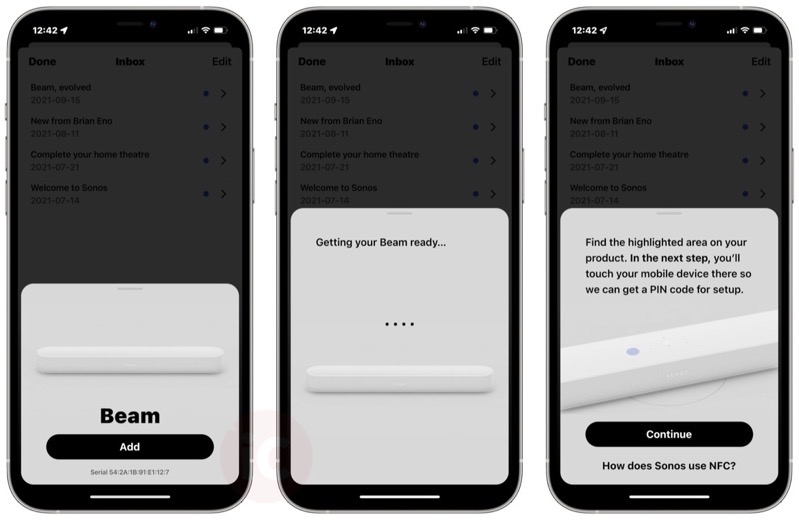 After that, Beam automatically joined our Wi-Fi network. Next, it asked us to install a software update which didn’t take very long at all. The Sonos S2 app then asked us to connect the Beam to our TV and it did so instantly. We didn’t have to mess with any settings on our LG C9 TV at all or touch our Apple TV 4K (2021) at all.

The set up was so easy it brought a smile to our face, definitely one of those ‘surprise and delight’ moments from Sonos. 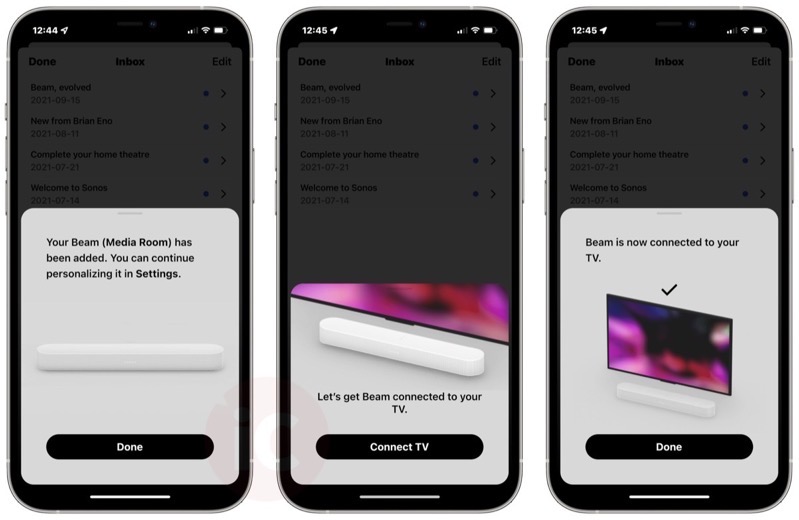 For existing Sonos Arc or Beam users, you can just straight up swap the power plug and HDMI cables to the new Beam once set up is done to switch between soundbars.

We did have to do the whole Trueplay tuning routine again, walking around our living room while waving our iPhone upside down without its case on. This process requires an iOS device and the end result is the Beam adapting sound based on your room, after the initial setup. I don’t think we used the Beam long enough to notice any differences in sound due to Trueplay.

What’s New in the Sonos Beam (Gen 2) Versus its Predecessor?

The major feature upgrades are the new grille design from the Arc, a 40% faster CPU to better serve heightened depth and clarity spaciousness (as Sonos puts it), plus there are now five speaker arrays versus three. Sonos wouldn’t comment when we asked if the new CPU was from the Arc or not. 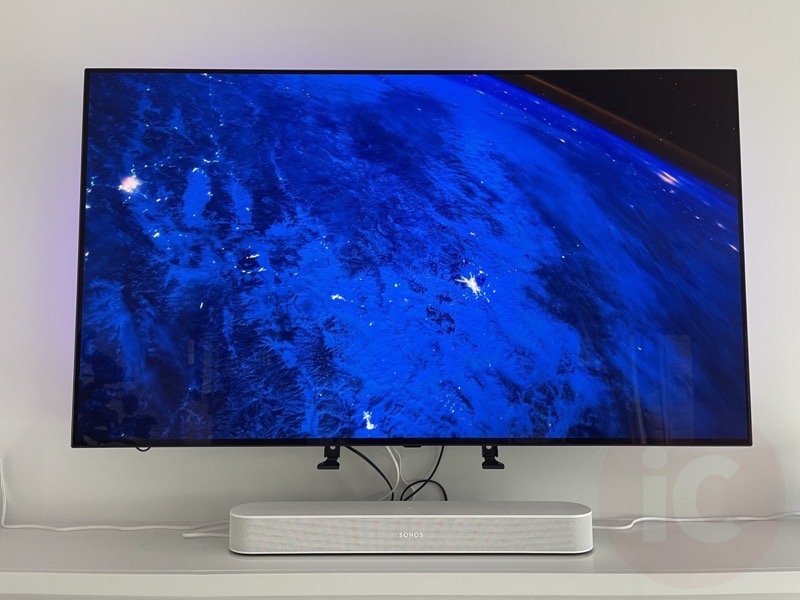 Also new is HDMI eARC to support Dolby Atmos in the Sonos Beam. Even if your TV doesn’t support HDMI eARC, Beam can still connect to it. But if you’re using an Apple TV 4K for Dolby Digital 5.1 and Dolby Atmos, you’ll need a TV with eARC.

Still supported is AirPlay 2, allowing you to send sound from your Apple devices to Beam, while Amazon’s Alexa and Google’s Assistant are supported for digital assistants.

The speaker was tested at 1,000 hours of max volume in a range of extreme temperatures, said Sonos, noting the soundbar’s durability.

How Does the Sonos Beam Sound?

We put the Sonos Beam through its paces by watching Dolby Atmos content in Disney+ and Netflix. You know you’re listening to Dolby Atmos as it will show you in the Sonos app within the Now Playing screen. While the Beam is smaller and geared towards smaller rooms, it performed well in our living room with a vaulted ceiling.

We watched Dolby Atmos content such as The Mandalorian, Star Wars: The Last Jedi and Our Planet. We also tested John Wick and Top Gun (RIP Goose!). Everything sounded really, really good on the Sonos Beam. We tested with the Loudness setting ‘on’ and EQ at default for both bass and treble.

After listening to the Arc as our main TV speaker for the longest time, we were reminded how the Beam is no slouch either.

Now, when comparing Beam (Gen 2) to Beam (Gen 1), the differences were not exactly huge, or not instantly noticeable to non-audiophiles. I tested both soundbars back to back, watching the same scenes at 50% volume. Even my test audience said they weren’t able to distinguish night and day differences, but we all agreed the new Beam sounded great with the new height channels for Dolby Atmos, sending sound to all corners of the TV.

The Beam is very clear for dialogue and can serve up some decent bass if you change up the EQ settings. It can get loud but also doesn’t distort at high volumes.

But when comparing the Beam (Gen 2) to the Arc ($1,099 CAD), that’s when you notice a big step up in performance. There’s more bass and fuller sound due to the extra physical nature of the Arc and its extra speakers. But it’s also nearly double in price compared to the Beam.

If you’re on the fence about buying the Beam or the Arc, just buy the latter if you have the budget and space for it. You’ll sleep better at night.

Speaking of night, the Night Sound feature lowers loud sounds and increases quiet sounds, allowing you to listen to audio late at night without waking others. This, coupled with Speech Enhancement can make for a great soundbar in the bedroom at night.

Here’s how the larger and more premium Arc compared to two generations of Beam soundbars: 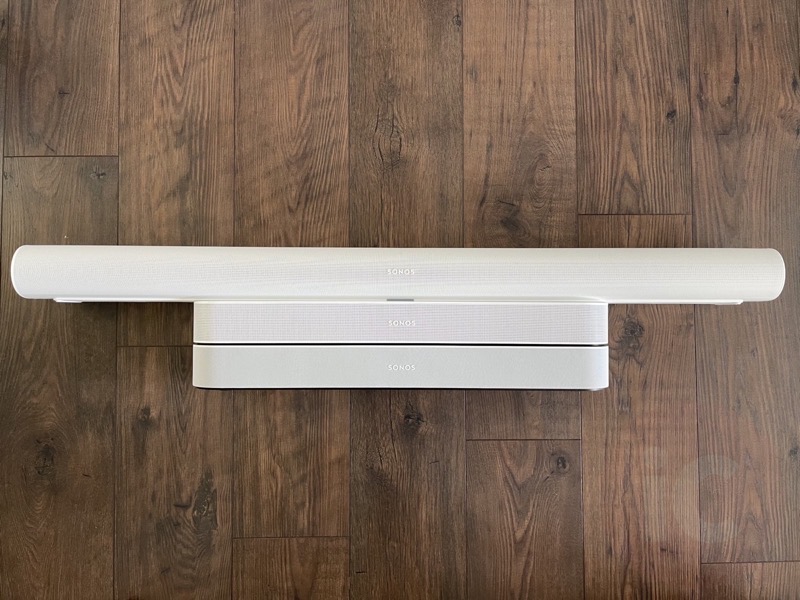 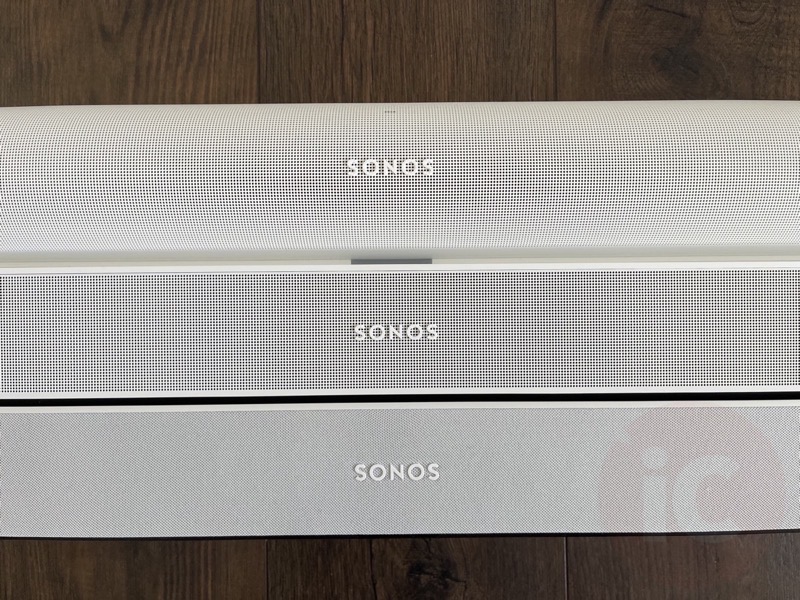 The Sonos Beam (Gen 2) comes with a $59 price increase compared to its predecessor, priced at $559 in Canada. When we asked Sonos why the price went up, they argued there were “lots of increased benefits” to justify the slightly higher price, namely a faster processor, Dolby Atmos, 5 speaker arrays (versus 3) and more features. Sonos also stated in a previous earnings call its prices would be going up across the board.

Will the global semiconductor shortage affect Sonos Beam? The company said they had their “heads down” and were “moving as quickly and as nimbly as they can” to push out new products, noting they were doing well fulfilling demand, but to shop early ahead of the holidays, of course.

The original Sonos Beam was a great compact soundbar to replace (usually crappy) TV speakers, and the upgraded second-generation gets even better with Dolby Atmos support. The new grille from the Arc makes for easier cleaning, while overall, set up is extremely easy Sonos supports nearly all your music streaming services as well. If you’re tired of not being able to hear your TV, the Sonos Beam should be at the top of your list for a soundbar.

Should you upgrade from the original Beam to the second-generation Beam? In our experience, we just couldn’t tell a ground-breaking difference that would justify buying a new one. We’d rather save up and just get the Arc instead, if you have room for it.

But for those ready to dive into their first soundbar and Sonos speaker, we would highly recommend the latest Beam, as the upgrades make it even better than before. Plus, you get easy set up and support for AirPlay 2, along with many music services (including Apple Music and Spotify), plus Alexa and Google Assistant. The Sonos Beam also looks good too, available in white or black to match your home decor.

Sony is diving back into the virtual reality well with PS VR2 and I for one have been eagerly awaiting this new generation. The original PSVR showed a lot of promise but was held back slightly due to over-encumbering setup solutions and archaic accessories. PS VR2 feels like a fresh start not only for Sony...
Steve Vegvari
6 days ago