Amazon Echo Studio Review vs Apple HomePod and Sonos One 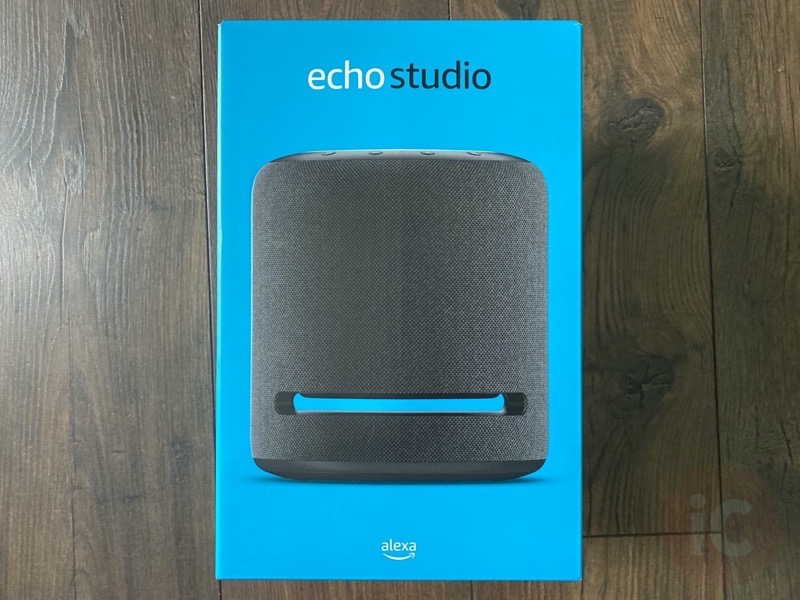 Back in September, Amazon announced five new Echo products, with one of them being the new Echo Studio, in what the company is calling its “best-sounding Echo ever”. Ahead of the Echo Studio’s launch on November 7, Amazon sent us a unit to check out for a hands-on review.

Once you pick up the box with Echo Studio inside, it’s heavy and lets you know things are about to get serious. Inside the speaker sits in a cloth bag with handles to let you easily remove it from the box. You’ll also see a quick start guide and the AC power cable. 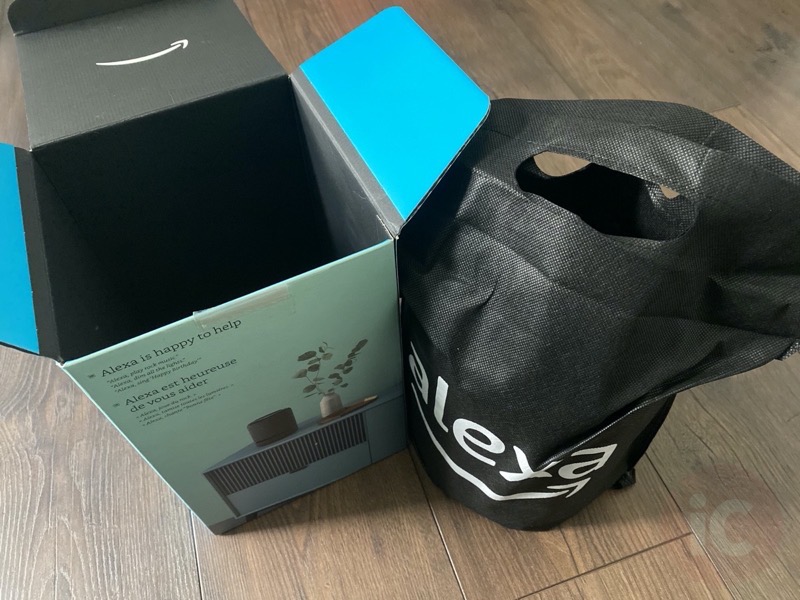 Design-wise, the Echo Studio almost resembles Apple’s HomePod but rather a larger and bulkier version, as it’s a pretty big speaker. The Echo Studio has a cut out near the bottom, what Amazon calls the “bass aperture” to maximize deep and low sounds. This empty space makes for a unique design to the Echo Studio, which also has a built-in smart home hub. 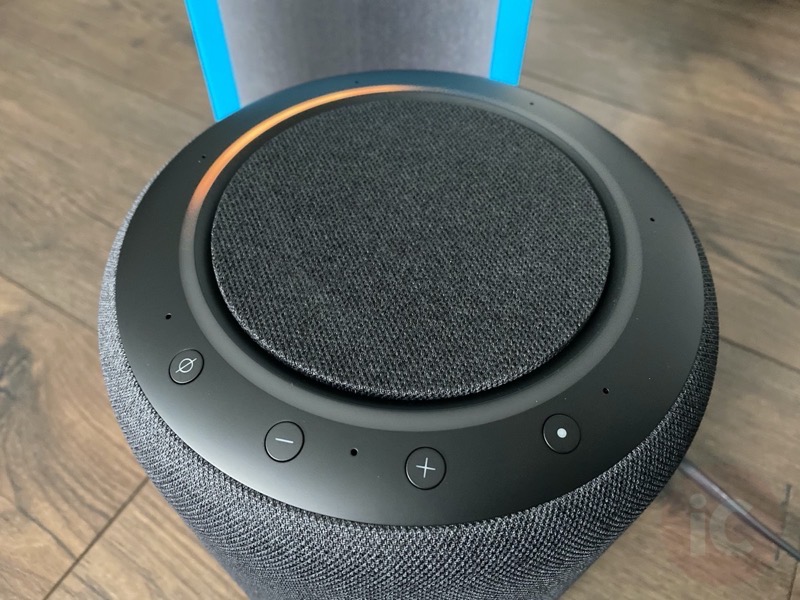 The top of the Echo Studio has a mic on/off button, volume up/down and an action button. On the back is the power port, and a 3.5mm line-in / mini optical in to let you play music from external devices.

Amazon says the Echo Studio weighs in at 3.5kg or 7.7 pounds. The weight comes from five built-in directional speakers, consisting of three 2” midrange speakers (facing left, right and up), a 1” forward-firing tweeter and a 5.25” downward-facing woofer.

The combination of these speakers allows Amazon to say the Echo Studio is the first smart speaker to support Dolby Atmos, which surrounds you with precision sound in all directions, in a system capable of 330W of peak power. 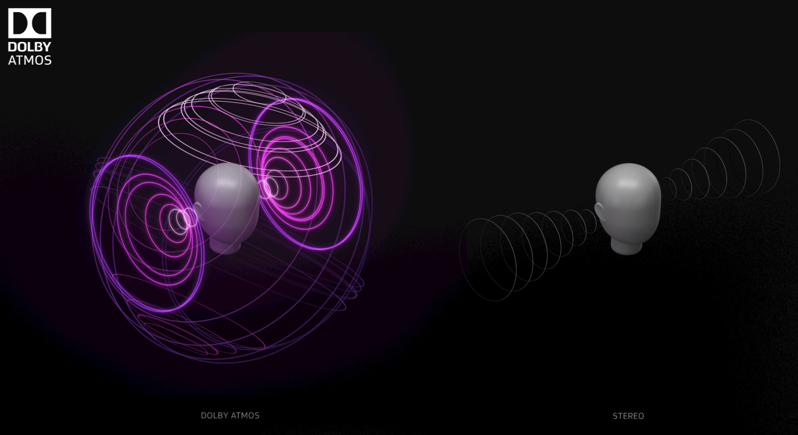 Echo Studio, like Apple’s HomePod and the Sonos Move, will fine-tune itself based on the acoustics of your room. The smart speaker powered by Alexa will automatically tune itself based on its environment for optimal sound, as you place it in various parts of the room.

Setting up the Echo Studio was very easy. Just plug it in (it will glow blue, then turn to orange to indicate setup mode), launch the Alexa app and follow the instructions. Alexa will greet you in both English and French.

After connecting to our home Wi-Fi, we had to install a system update which took about 13 minutes. During this time you cannot use the Echo Studio. The Light ring does turn into a progress indicator for the update, so you get a visual on how much time there is to go. 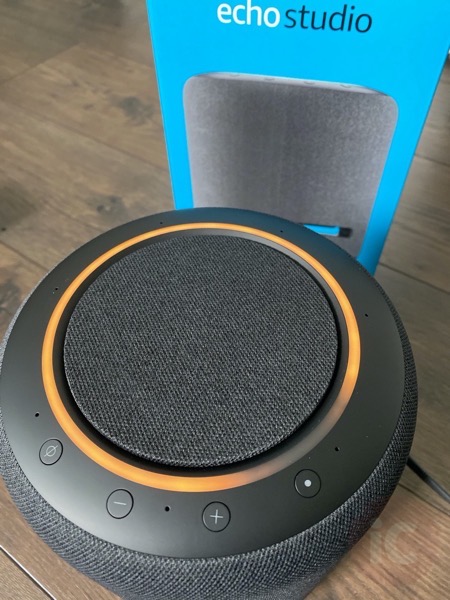 Listening to Echo Studio for the First Time

Once set up, it was time to test the sound from Echo Studio. We fired up some of our favourite songs, such as ‘I Got 5 On It’ by the hip hop duo, Luniz, which is always a great way to test for deep and low bass (also a great way to test your high school car stereo back in the day).

The Echo Studio, placed in our office, delivered some room-filling sound that was quite booming and pleasing. It made us quickly forget about our overpriced Apple HomePod. Playing the ‘I Got 5 On It’ on Echo Studio and then HomePod wasn’t even a contest, with the Amazon speaker rocking the room better than Apple’s speaker. 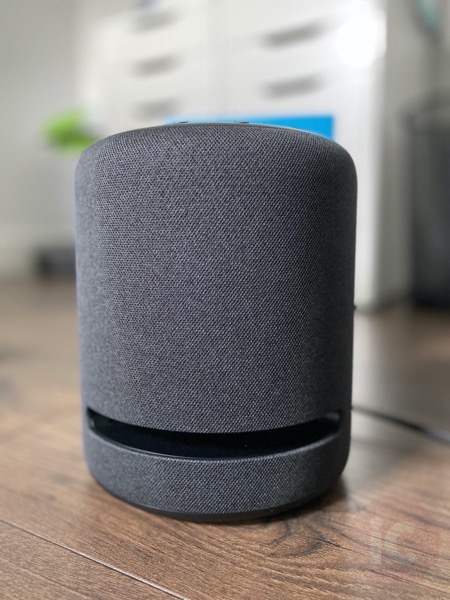 Amazon’s Echo Studio is able to bring more bass versus HomePod. Echo Studio’s bass is like the two 12-inch JL Audio subwoofers in the trunk of your lowered 1995 Honda Civic, instead of the 8-inch subs you got on a budget from Canadian Tire. On top of delivering better bass, Echo Studio offers better midrange and crisp high frequencies. To me, HomePod never sounds as clear as it should.

Pitting Amazon Echo Studio against the portable Sonos Move, which offers better sound versus its sibling the Sonos One, the Echo Studio also sounded better. The ability of Echo Studio to direct sound around the room was actually a joy to listen to. 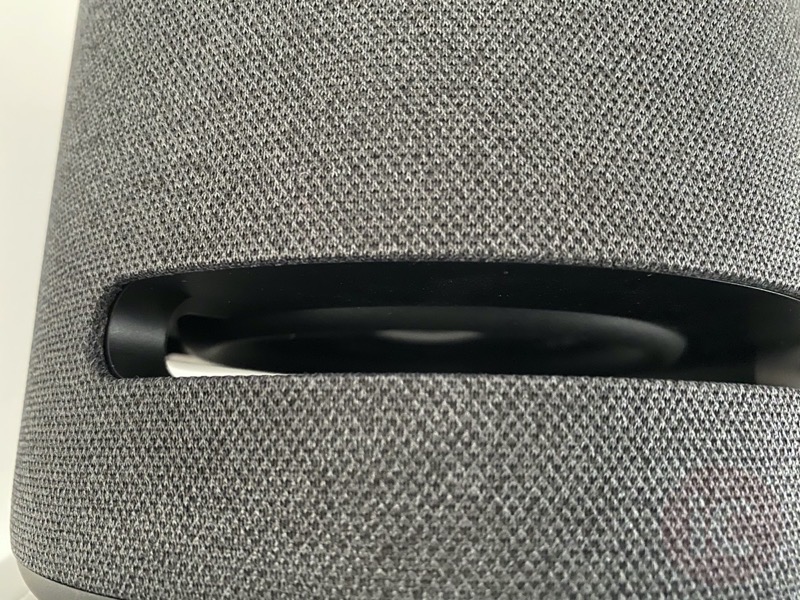 There she is: the exposed down-facing 5.25” woofer

Echo Studio vs HomePod vs Sonos One vs Sonos Move

We also tested tracks suggested by this list over at WhatHiFi, songs to test your speakers with. We’re not audiophiles by any means, but we can tell what sounds good to us:

By default, the Alexa app has Upmixing enabled in settings on Echo Studio, which says it will “Transform stereo content into 3D audio”, as part of Dolby Atmos processing. With this setting turned off, tracks appeared to have a bit more bass and clarity. We left it on during our tests while we also had bass, midrange and treble EQ settings ramped up and volume at around 70-80%. 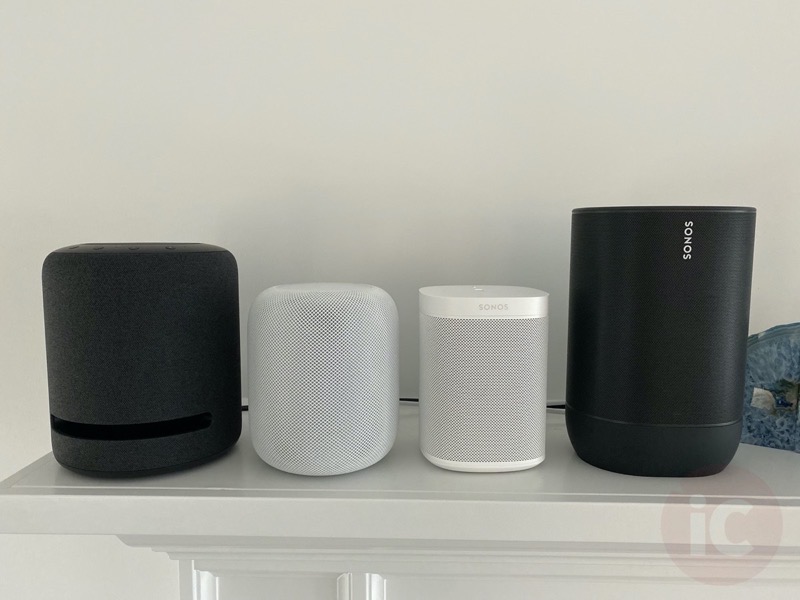 Testing the Echo Studio against Apple’s HomePod, a Sonos One stereo pair and the Sonos Move, I played some tracks and asked my wife what she thought was the best. She’s not an audiophile but a huge music lover so she knows what sounds good to her.

The overall consensus was the Echo Studio sounded the best because it was able to fill space better and also had more bass and overall booming sound. HomePod sounded ‘muffled’ to her when it came to mids and highs, while the Sonos One stereo pair was actually her close second favourite offering crisp highs. The Sonos Move can actually hold its own and is able to also pump out some loud tunes with good bass.

The Echo Studio can also act as the wireless audio output (offer Dolby Digital 5.1 and Dolby Atmos audio) for the new Fire TV Cube (2nd Gen) or Fire TV Stick 4K. We weren’t able to test this setup in time, but will update this review once we do.

As for Alexa, if you’ve used Amazon’s smart assistant on other Echo speakers, you know about its capabilities. The mics were able to easily pick up my “Alexa” request even with songs playing at nearly max volume.

Now that Amazon’s Echo speakers and devices can support Apple Music (announced back in September), it means you can use Alexa to control your music and no longer limited to HomePod for voice controls. Other music services supported include Amazon Music, Spotify, Deezer, SiriusXM, TuneIn, and TuneIn Radio.

With Echo Studio priced at $259.99, it’s $140 cheaper than Apple’s aging HomePod at $399 CAD, while also offering Dolby Atmos and better booming sound. It’s also $10 more than the Sonos One which costs $249 CAD. But the Sonos and HomePod both support AirPlay 2, if that matters to you, while the Sonos One also has Google Assistant and support more music services.

A stereo pair of Echo Studios would really pack a punch as a home stereo that won’t break the bank compared to higher-end systems. The speaker is quite large though and might not fit all fireplace mantles.

As you can tell by now, we were impressed with the Echo Studio and its immersive audio thanks to Dolby Atmos, offering excellent bass, balanced midrange sounds and crisp highs. Amazon’s aggressive price point for the Echo Studio at $259.99 has it priced lower than larger speakers from Sonos and Google. It’s definitely worth considering if a sale rolls around during Black Friday.