Google is stepping up its game with the latest Chromecast with Google TV. There was a span of time when I felt Chromecast was being pushed to the sidelines as many TV manufacturers began outpacing Google’s flagship streaming device with their own operating systems and UI. 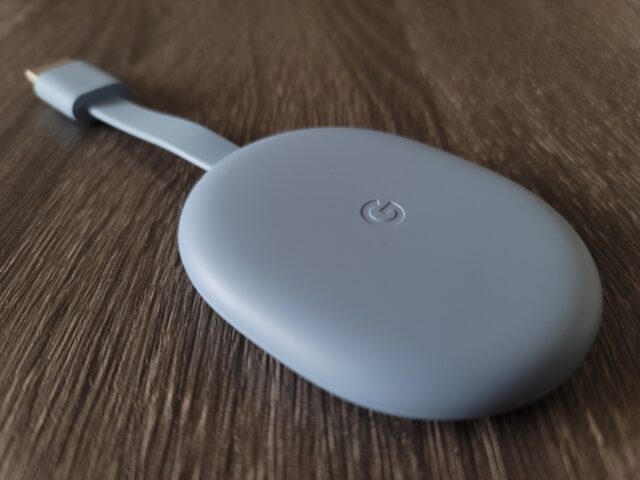 If you’ve ever used a streaming stick like Chromecast, Roku, or Amazon’s Fire Stick, you’ll likely know what to expect when it comes to packaging. The retail box for Chromecast with Google TV is only slightly bigger due to the included voice remote. 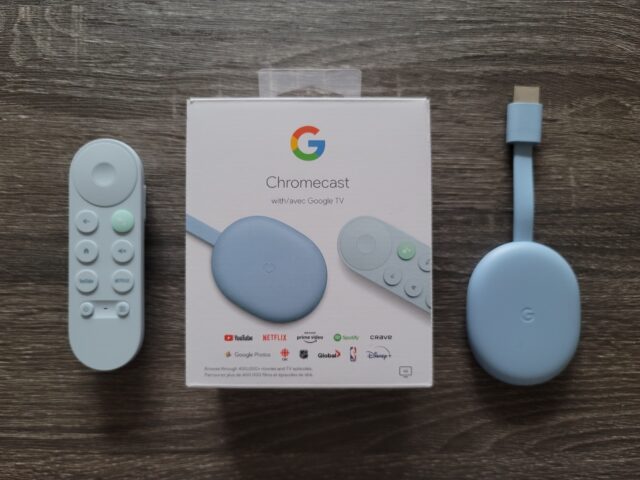 On the front, the packaging lists off the main streaming services supported on Chromecast. Of course, you have the major players like Netflix, Disney Plus, and Amazon Prime Video. As this is the Canadian model, Crave, CBC Gem, and Global apps are also supported. This is a Google device after all so Google Photos and YouTube are also listed on the box.

Google keeps it fairly simple in the packaging. Within, two cardboard sleeves containing the Chromecast and remote lay flat. It also comes with a USB-C power connection, a pair of AAA batteries and a start-up manual.

The packaging is very by the books with very little frills involved. The one thing I do appreciate is that Google has released Chromecast with Google TV in three colour variants. First is Snow, which is its typical white model. Then you have the peach Sunrise model and baby blue Sky. The latter of the two are beautiful pastels. Though, while the Chromecast itself is likely to hide behind your display, the remote also comes in the aforementioned colours so the colour doesn’t go unappreciated.

As with all contemporary Google devices, the setup process is relatively straightforward. This point is exponentially more true if you already have your Google account and Google Home setup prior to purchasing the Chromecast with Google TV.

As with Chromecast devices in the past, the new Chromecast is set up remotely through the Google Home app. Upon syncing the device with your WiFi, the Chromecast will install any software updates. I took the time to preinstall all the streaming apps I frequently use. I also took the necessary steps to add the Chromecast to my living room space within Google Home. Thus, I could begin using my Google Home Nest to control the Chromecast via Google Assistant commands if I desired.

Afterwards, it was a matter of connecting the voice remote to my TV. The onscreen instructions took me through the steps to ensure the remote could control the on/off function as well as navigate the volume control on my soundbar.

Android TV walked so Google TV could run. Google has transitioned from Android TV to the new banner of Google TV. Everything still runs through Google, so you’ll have access to the Google Play app, and have your Google account sync up with YouTube and your Photos. It’s first and foremost important to sign in to any and all of your streaming services. For me, personally, I had Netflix, Amazon Prime Video, Disney Plus, and Crave all set up and ready to go on the Chromecast. 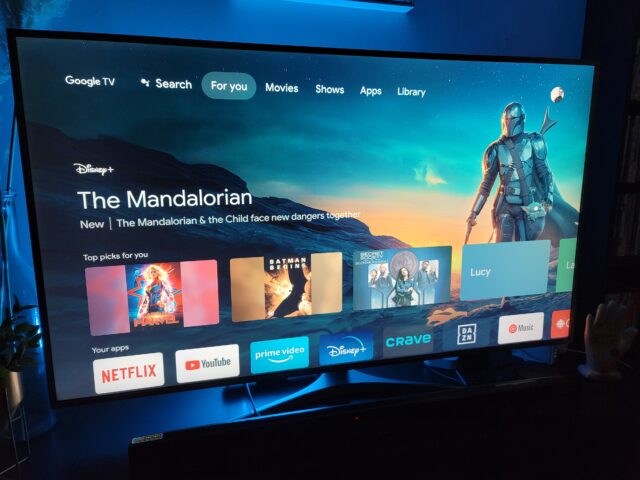 The top of the Google TV home screen is broken into four major categories: Movies, Shows, Apps and Library. Each tab shows a list of thumbnails relevant to the subject category. Movies, for instance, will pull from Netflix and other platforms to create a catalogue of films across all streaming services. The same goes for Shows. Apps is the source for searching additional streaming platforms and applications supported by Chromecast. Finally, Library will house all rentals and purchases I’ve made through Google Play for quick access.

There is also a search function to use to find specific titles across all your preferred services. Of course, you can always cast from your iOS and Android apps to the Chromecast or mirror the media playing from Chrome on your laptop. Music apps such as Spotify can also be used to stream through the TV.

The Google TV UI is really clean and intuitive. It’s certainly a step up from some streaming services and devices I’ve used. The home screen is an amalgamation of new features and popular titles. Unfortunately, as it stands, Google TV won’t offer picks from CBC Gem, Funimation, Crunchyroll, etc. Instead, you’ll be offered a selection of titles from the larger platforms like Netflix and Crave. The UI borrows heavily from the most popular services such as Netflix and Amazon Prime Video.

Most importantly, it’s fast. Thumbing through titles and skipping between menus, the Chromecast never skipped a beat. You’re also able to customize a watchlist across all your services. This is a feature not seen nearly enough as many households have adopted streaming as their primary use of media. Google TV could also be improved in the future by including support for ‘Continue Watching’.

The new voice remote is light and small. I was a bit concerned at first. While the remote doesn’t feel like the most durable remote out there, it makes up for it in functionality. The layout and simplicity of the voice remote are exceptional. 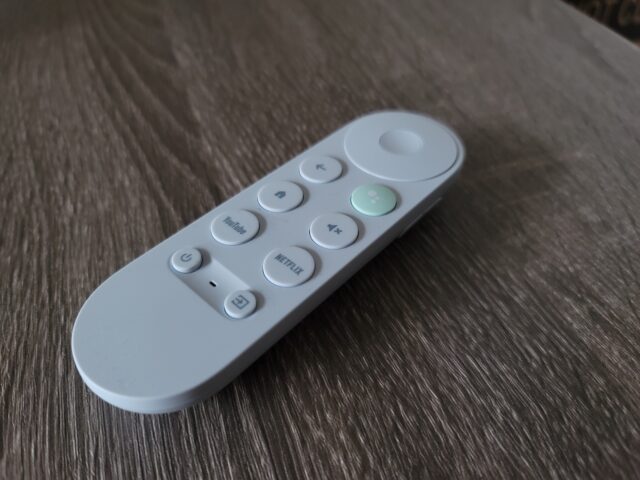 On the remote, you have a D-Pad wheel for navigation. It also features a Home button, back button, and mute button. On the right side, Google has placed the volume controls. Personally, I would have liked the volume up and down button to have been a bit longer, but I do appreciate how noninvasive they are to the overall design. There are also two quick-navigation buttons. Google has implemented a Netflix and YouTube button to quickly access each respective app.

Additionally, there is a Google Assistant button for using voice commands. Simple use of this button can bring up anything from horror movies to comedies, and everything in between. If you have additional Google Home products, you can also use the remote to utter commands. If you’re using a Nest Cam, for instance, Chromecast can pull up the feed onto your display. The voice remote can also control your smart lights. In my testing, I used it to power and adjust my Hue Play light bar during the evenings.

Streaming on Chromecast with Google TV has been splendid all around. The Chromecast supports 4K HDR with up to 60 FPS. Dolby Vision and Dolby Atmos are also supported for displays that offer compatibility.

Streaming anything that takes advantage of the hardware, such as Season 2 of The Mandalorian or The Haunting of Bly Manor, you’ll see the crisp colours and phenomenal contrast thanks to the HDR 10+. I did experience a very minor case where the content would begin in 1080p and then jump to 4K after 30 seconds or so, however.

Google has stepped up in a big way in pursuit of dominating my living room. Whereas I would previously jump between streaming platforms within my Samsung TV, I now have a collected catalogue of my favourite shows and movies all on an impressively intuitive UI.

Google has clearly focused on the tech and ease of use over flashy hardware. The Chromecast is very simple but packed with above standard features and quality support. To the same point, the voice remote is minimalist in design but offers exactly what you need in its small and compact body.

The Google TV platform is likely to evolve over time and improve. For $69.99 CAD, the Chromecast with Google TV is a rather worthy investment that currently offers great performance and becomes an intrinsic part of your smart home thanks to its Google Home and Google Assistant integration.