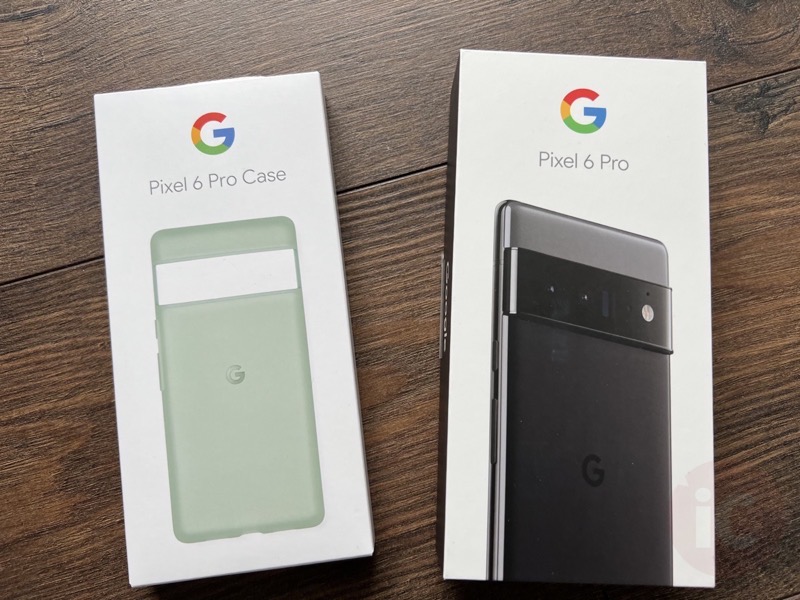 Google announced its new Pixel 6 and Pixel 6 Pro smartphones at an online event last week, the company’s latest phones. We had the opportunity to go hands-on with the new Pixel 6 Pro, so here’s our quick take (we’ve had the phone for less than a week) with how this phone feels and performs, compared to our iPhone 13 Pro Max (just another ‘boring’ update versus last year’s iPhone 12 Pro Max: better cameras, better battery; 120Hz is awesome).

Google sent us the Pixel 6 Pro in ‘Stormy Black’, along with a case in ‘Soft Sage’. There is essentially zero plastic in the unboxing process as manufacturers move away from unnecessary plastic. 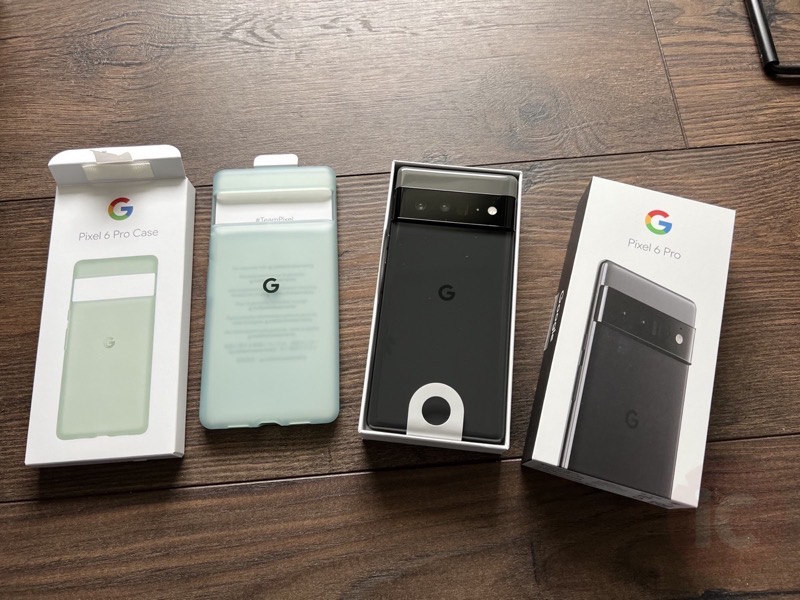 First impressions of the Pixel 6 Pro design? The back is shiny plastic, the camera bar on the back is not as offensive as one might think, and the rounded edges of the device make it feel pretty great in the hand: 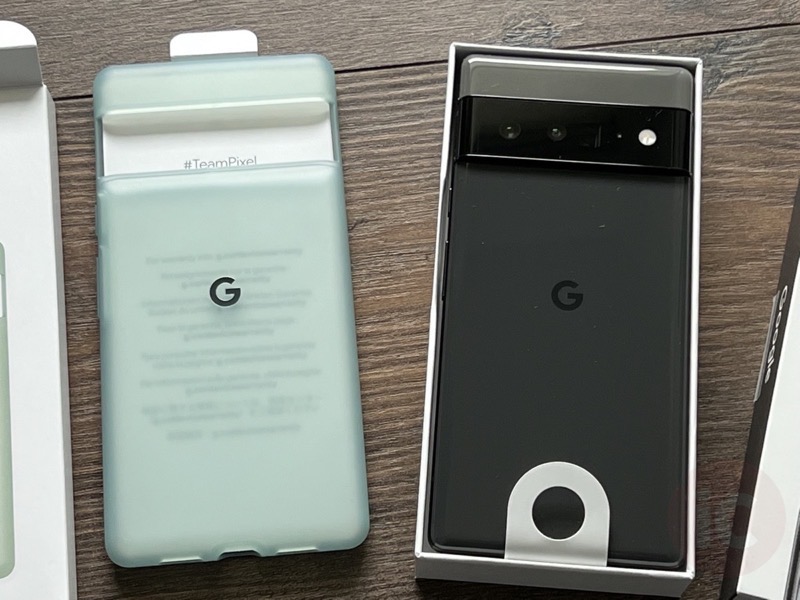 Inside the box, you’ll find a USB-C cable and USA-A to USB-C adapter. No headphones or a power adapter: 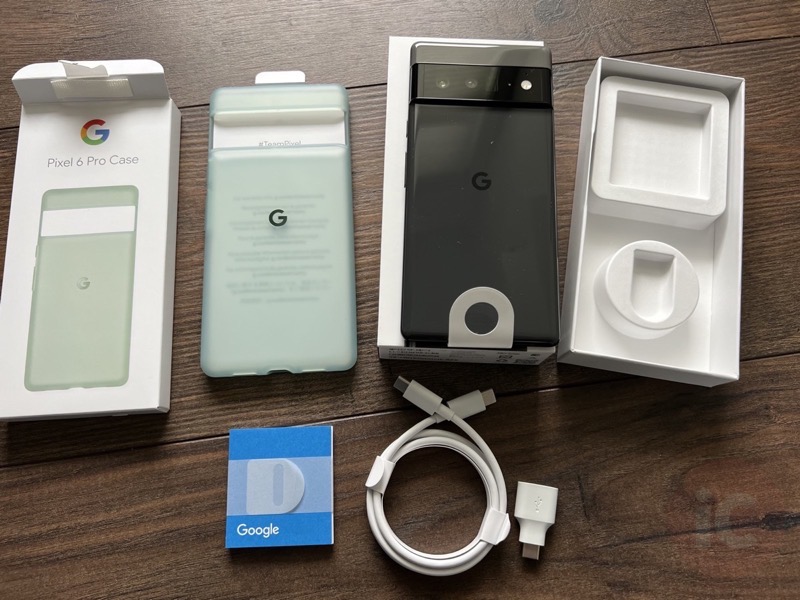 Here’s a closer look at the Google Pixel 6 Pro case, which the company says is made from over 30% post-consumer recycled material. It’s light and has a smooth matte finish on the back, while raised edges also protect the rear camera bar: 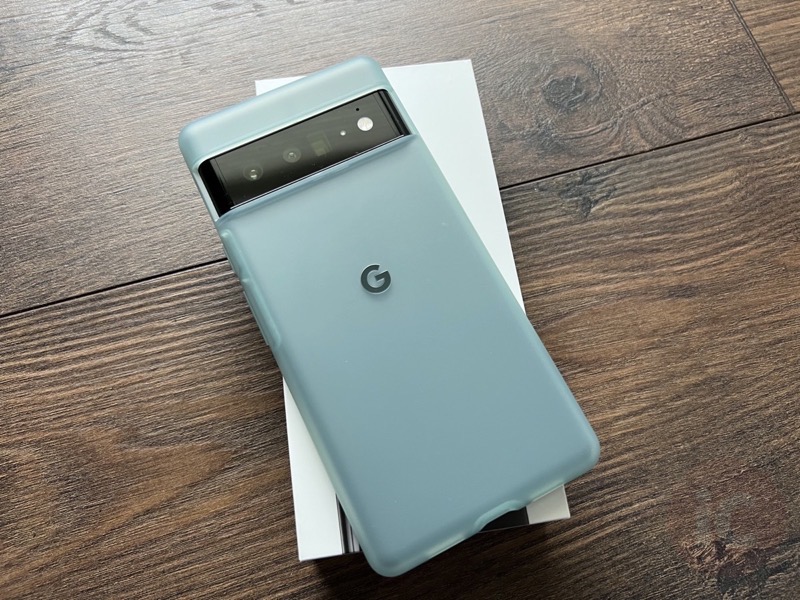 Here’s the Pixel 6 Pro box next to the iPhone 13 Pro Max’s box. Both are smaller than before, with the iPhone’s box slightly thinner, but also taller: 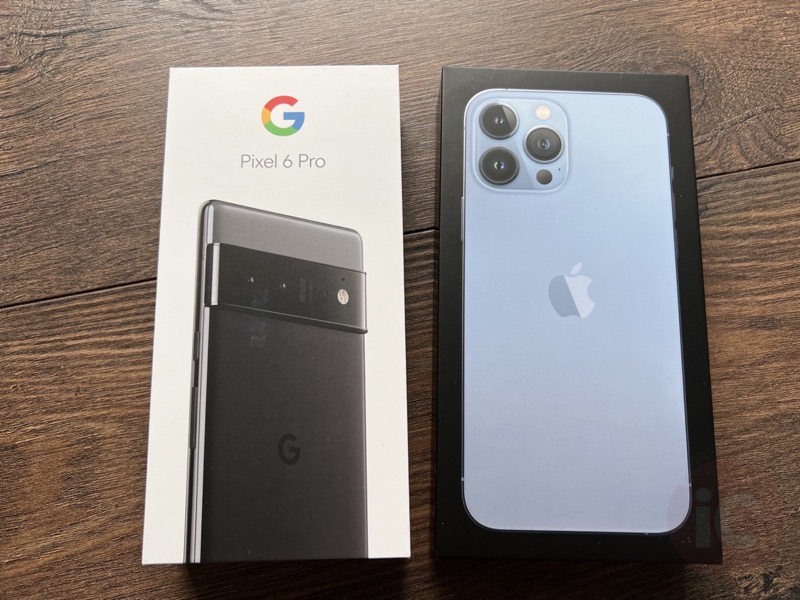 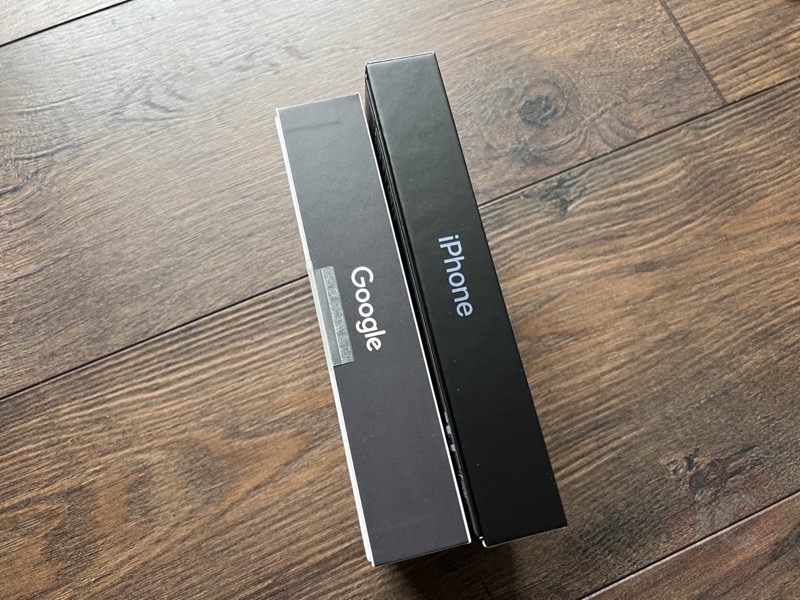 For those asking about a picture of the bottom of the box: 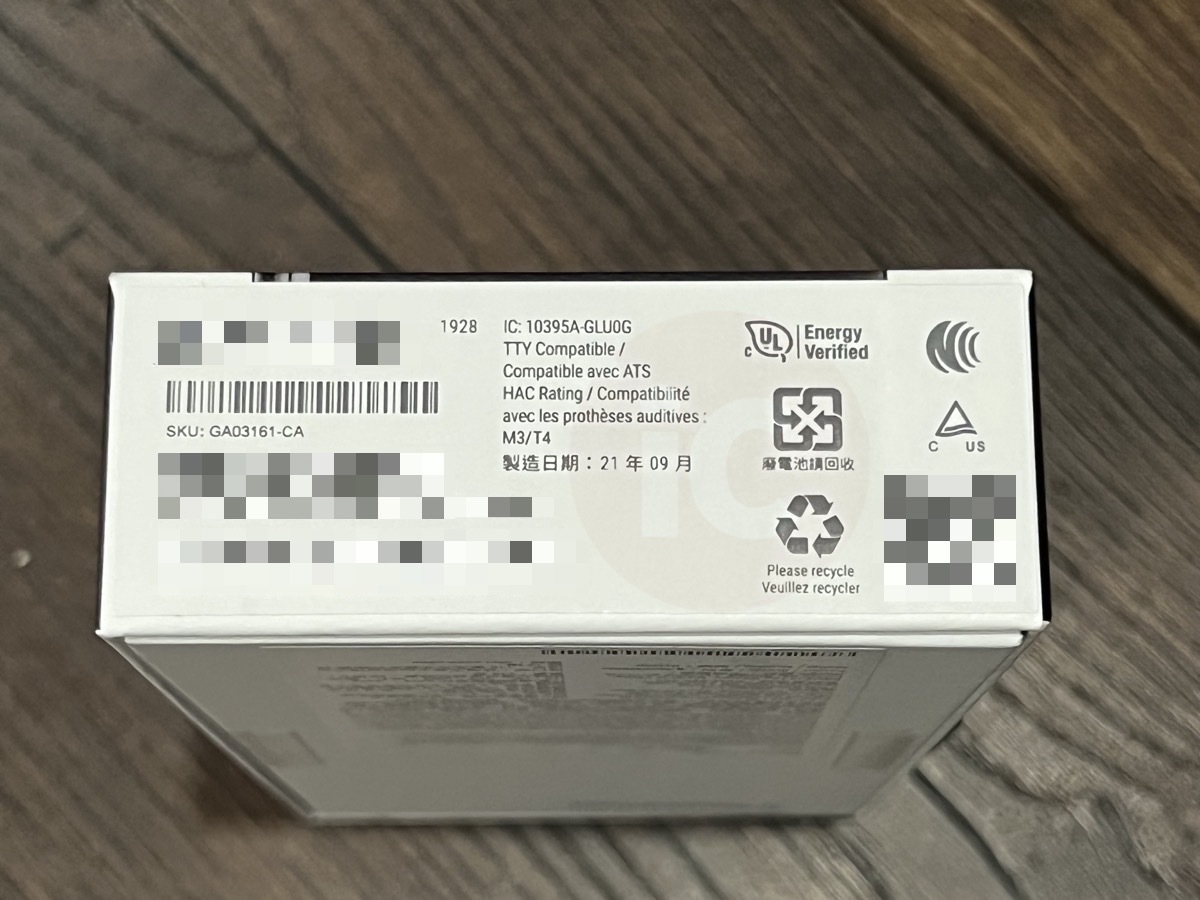 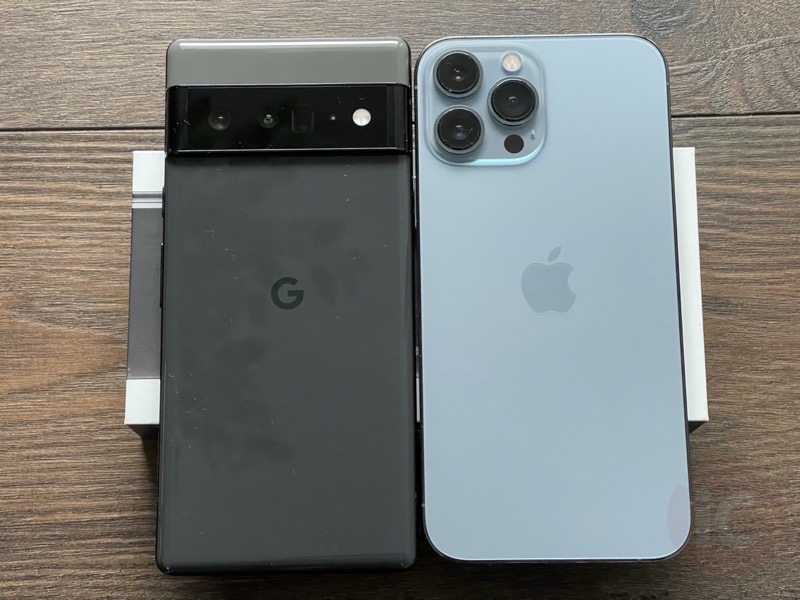 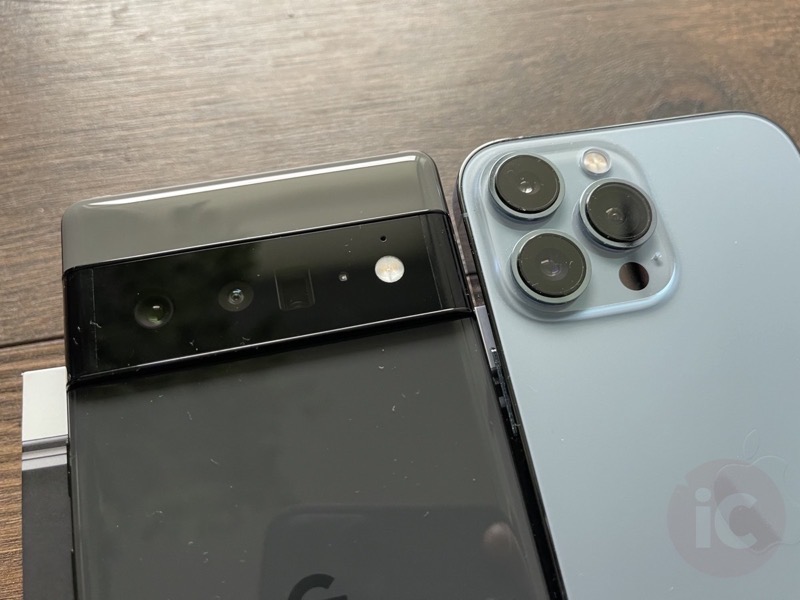 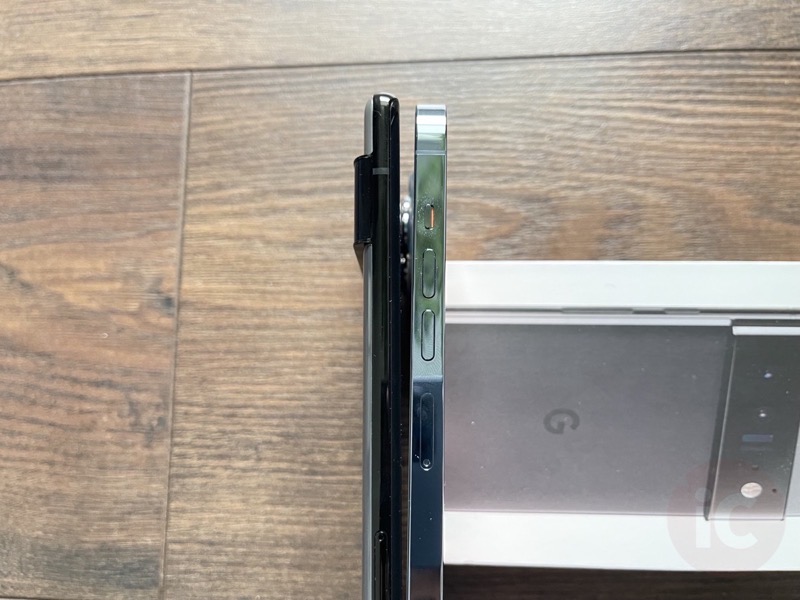 Here are the displays side-by-side showing Apple.ca. You get a view of the front hole-punch camera on the Pixel 6 Pro and also the now 20% smaller notch on the iPhone 13 Pro Max: 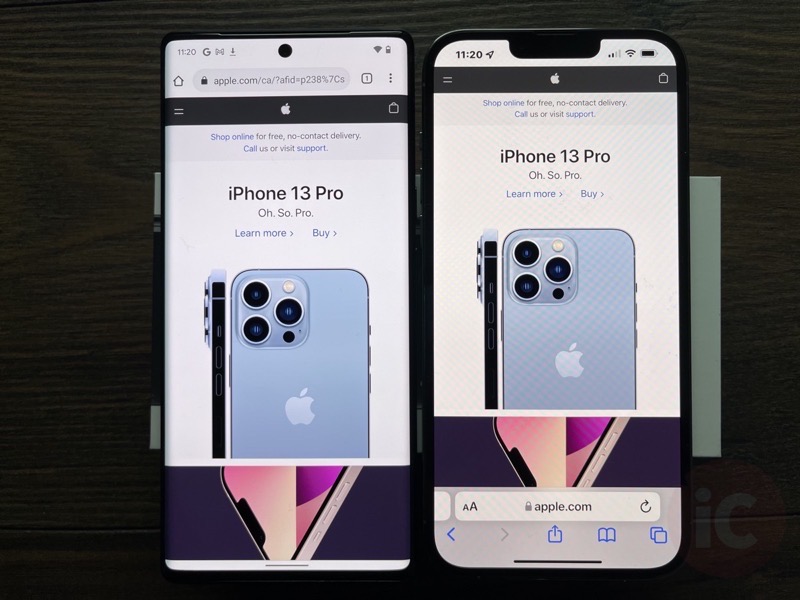 With LTPO technology, Google says the display can lower its refresh rate to 10Hz on its own to save battery life.

Setting Up the Pixel 6 Pro

It’s been no surprise that I’m a heavy Google user, so it’s pretty cool to have seamless access to all of the company’s services once signing in with your Google account. The set up process was straightforward forward and there were no major surprises. There are a lot of options and settings available in Android 12.

The Pixel 6 Pro is a fast phone powered by the company’s first in-house Tensor chip. We were told an over-the-air ROM update would arrive for us after set up, but it never popped up. Nonetheless, the phone’s features still worked fine and there were no issues with Android 12.

Gestures within Android 12 for going back to the home screen and switching apps are similar to iOS. The only issue we had was muscle memory and swiping up when trying to unlock the phone.

The one feature we wanted to try in the Pixel 6 Pro was ‘Magic Eraser’, which can automatically remove people and objects in a scene. The feature is located by opening a picture in Google Photos, tapping ‘Edit’, then ‘Tools’ and then ‘Magic Eraser’.

From here, Google’s on-device AI will suggest objects to remove. We manually removed the car below and while it did disappear, it wasn’t perfect by any means.

We will need to do some more testing when the weather cooperates more on the westcoast. Google says this feature works best for scenes like beaches and parks for removing distractions in the background. 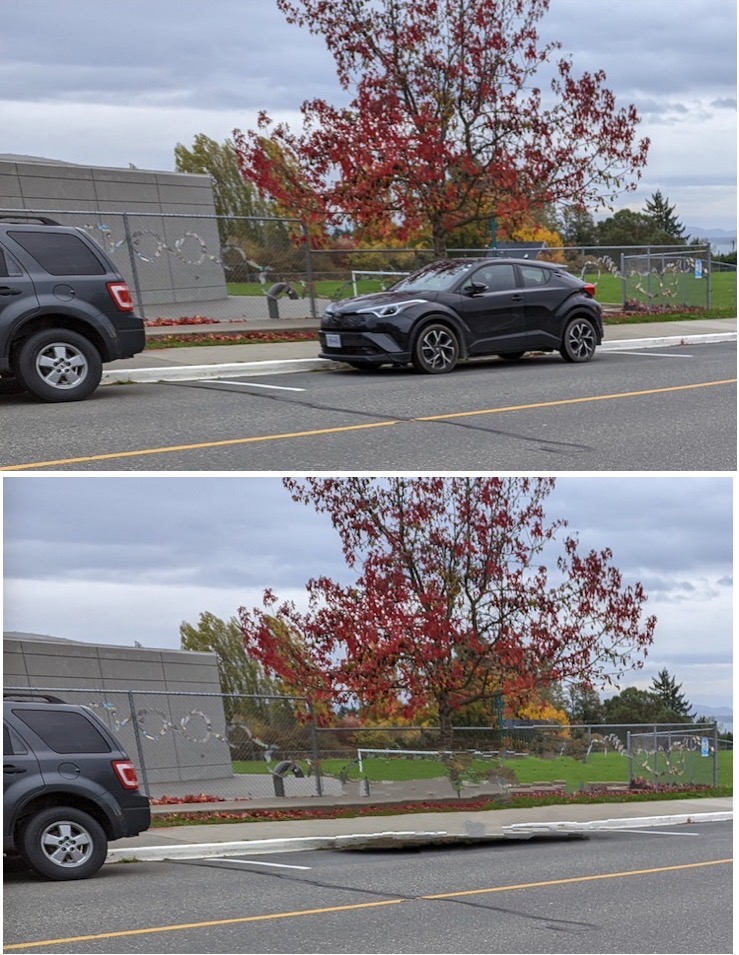 With Face Unblur, just by snapping a picture where the blurring of someone’s face can occur (someone jumping up and down), the Pixel 6 and Pixel 6 Pro feature did ‘unblur’ the face. It wasn’t crisp, but was good enough to be able to recognize the subject again. You know it works when there’s an unblur icon label next to the photo.

Motion Mode includes Action Pan and Long Exposure for action shots. Action Pan will focus on a subject such as a moving car and blur the background. Long Exposure adds blur to moving objects. Both features worked as described on our first try. Waiting for Apple to add these features to the iPhone and to announce them as breakthroughs.

The ultrawide front camera for selfies is nice and we wished Apple added a wider front lens to the iPhone. No more straining your arms and shoulders for those group selfies.

We didn’t put the Pixel 6 Pro through its paces for battery life, but after unplugging it in the morning and using it lightly until the afternoon, we were still showing 93%. This was with Adaptive Battery preferences enabled by default. Extreme Battery Saver hasn’t been tested. This is on a newly set up phone with not a lot of apps installed. Still decent and more than enough juice to last an entire day, like the iPhone 13 Pro Max.

The Live Translate feature on Pixel 6 Pro is pretty incredible and felt like an Apple “surprise and delight” moment.

Interpreter Mode is so good it felt like magic. After asking Google Assistant to “Be my interpreter”, selecting your languages the system will then listen and read out live translations, for both languages, as it stays listening. There’s no need to tap as it’s all happening in real-time, powered by Google’s in-house silicon, Tensor. There are also one-tap suggestions for follow-up replies.

This feature blows anything Apple has within its Translate app out of the water. You can really have some fun with your kids with this feature. Interpreter Mode supports English, Japanese and German offline, while online support is available for 48 languages.

In our short time with the Pixel 6 Pro, we experienced a solid smartphone, and we wouldn’t hesitate to recommend it to someone that doesn’t want an iPhone.

You get Android updates first with Pixel devices, and don’t need to wait for carriers. The phone has a gorgeous display, the cameras are excellent, operations are smooth and early battery life has been impressive. If you’re a Google user, you’ll feel right at home.

Interpreter Mode is so good out of the box, it’s worth taking a Pixel 6 or Pixel 6 Pro travelling overseas, when we resume that in god-knows-when.

The build quality of the Pixel 6 Pro didn’t feel as premium as our iPhone 13 Pro Max. The Pixel 6 Pro also was quite slippery outside of the included case. The in-display fingerprint reader didn’t work every single time, likely due to our dry fingers from handwashing.