If you’re looking for a Bluetooth headset that works well with the iPhone 5s and Siri, the Plantronics Voyager Legend, which was sent to us to test for the past week is one to consider as it’s filled with premium features. 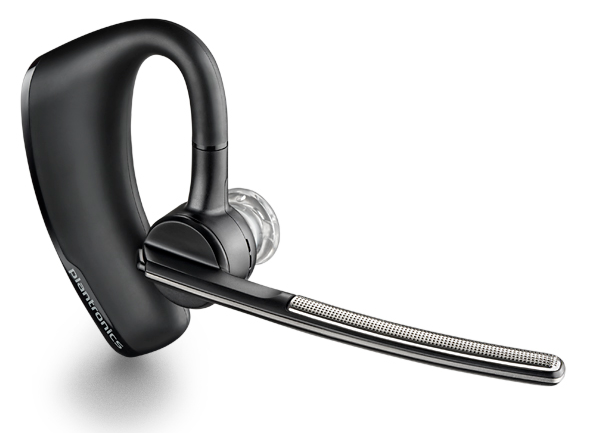 Plantronics debuted their Voyager Legend a year and a half ago dubbed as “the world’s smartest headset”, a pretty bold statement. But when you take a look at the list of intuitive features that make up the Legend, it’s jam packed to meet the needs of any road warrior. 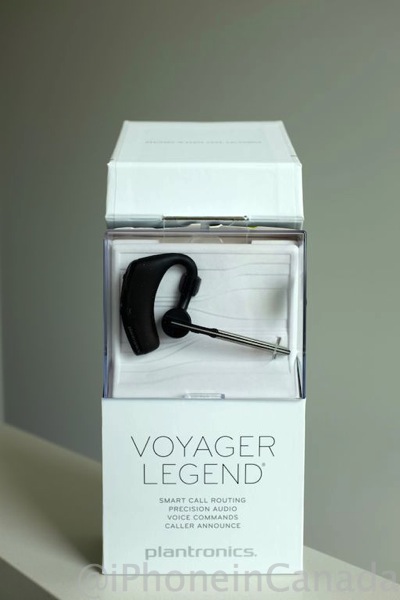 The headset itself resembles their legacy Voyager Pro, as it loops over your ear, making for a comfortable fit that doesn’t fall off easily. As before, the boom mic swivels up and down and left and right, which allows for left or right ear configurations.

I’ve never favoured Bluetooth headsets that fit into your ear as they tend to fall out if accidentally knocked and it can be hard to get a good fit. With this loop over design, the headset essentially ‘rests’ on your ear—all you have to do is pick the right ear tip to fit your liking (there are three sizes included). 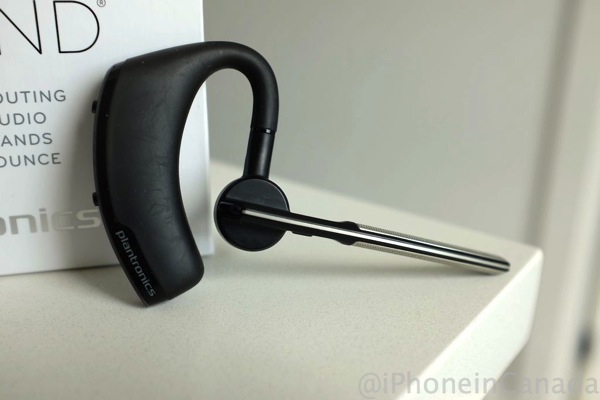 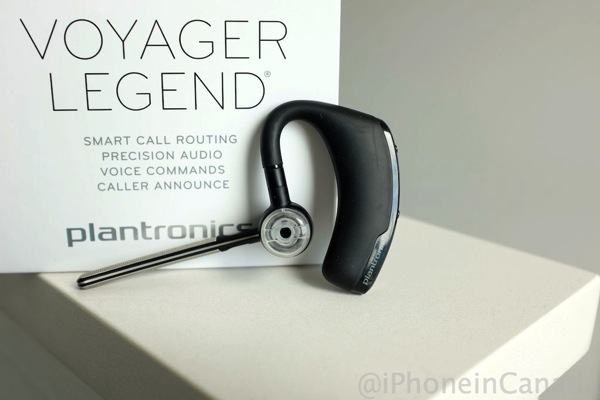 The boom mic is sleeker and thinner than before. The stainless steel windscreens, along with an internal acoustic fabric mesh and an electronic filter in the mic circuitry offer multiple forms of protection against wind noise.

On the back of the headset there’s a rocker switch to control volume and a power on/off switch, plus an LED that lights up when charging. A button on the top of the boom mic will read out how many hours of talk time you have left and also indicate which device you’re currently connected to. Holding this button down will enable Siri, allowing you to control your iPhone.

A smaller button underneath the boom mic allows for voice commands, where you can ask the following: 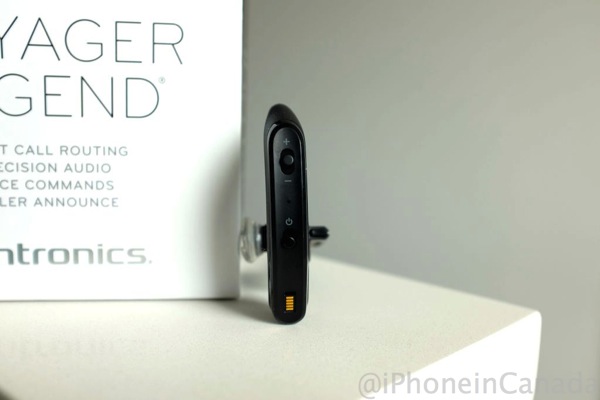 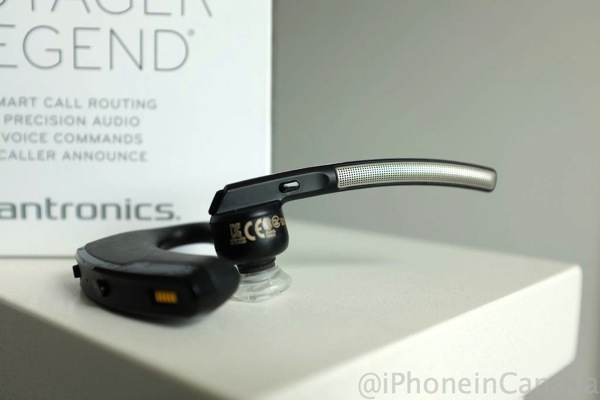 The Voyager Legend’s boom mic might be a turn off aesthetically, but no one ever really looks ‘good’ with a Bluetooth headset on their ear. At least this one looks pretty slick compared to the older Voyager Pro. If you’re only using your phone for calls in the office and in the car, then it won’t really matter at all. Regardless, the Legend does look decent in our minds and it’s good enough to be on TV. You may have seen the Voyager Legend being worn by the CIA cast on 24: Live Another Day.

One thing to keep in mind though, is the headset comes with a proprietary USB charging cable (instead of microUSB) that would be nicer if it was longer, as it’s too short. The company tells us it’s short to help “cut back on clutter” while charging the device on desktops and a longer cable is available for purchase for $6.95.

Despite that, the Voyager Legend pops into the charging connector nicely when via magnets, with a quick snap similar to how Apple’s MagSafe works or how you’d charge a Pebble smart watch.

The magnetic connection is strong enough to hold onto the headset while dangling. I understand the trade-offs for using a different charging connector instead of microUSB, as the Voyager Legend’s body is slimmer than the original Voyager Pro design. 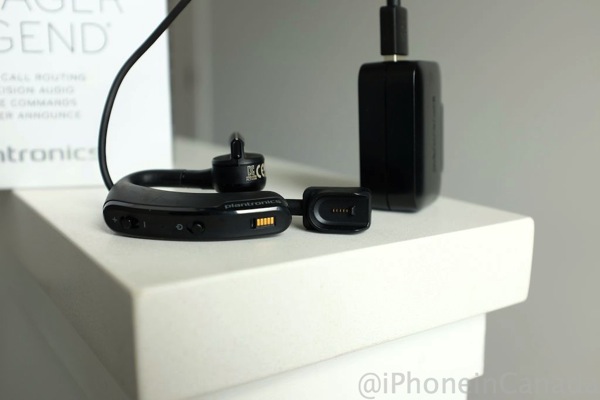 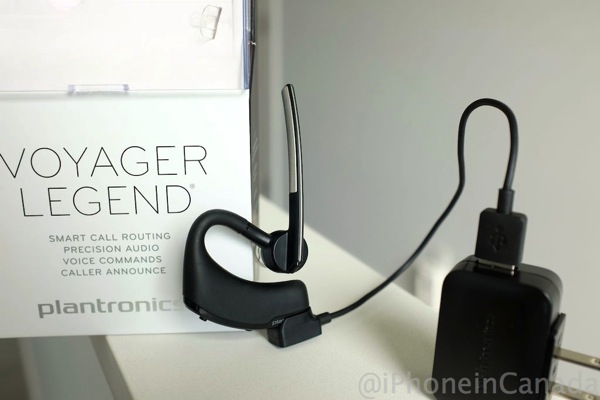 Another feature is Call Announce and Voice Answer. Incoming calls will read out contact names, then waits for you to speak ‘Answer’ or ‘Ignore’ to take action, hands-free.

In my tests, the Voyager Legend worked exactly as described when answering calls automatically and seamlessly transferring active calls to back my iPhone 5s. I could take the headset off while in a call and it would quickly switch audio back to my iPhone. The same goes for wearing the headset as it’s very quick to pick up active calls.

The only issue was when taking the headset off, at times iPhone audio (i.e. sounds, notifications, etc.) would stay connected to the headset instead of going back to the phone. In order to change this you need to manage the routing of sounds via Control Center on your iPhone (swipe up and tap where you would choose AirPlay and select ‘iPhone’).

As for call volume, it was pretty good at max even in a relatively noisy environment with light music on in the background. Of course, we always want it to be louder and I found you need to try out each ear piece to get the optimum sound and fit. Wideband audio is supported for phones that support HD Voice, such as the iPhone 5/5s.

The three microphones within the Voyager Legend along with its three layers of wind protection did make for some excellent call quality in our tests. Since the headset is also moisture-resistant thanks to a nano-coating, I was able to wear the headset (and look really, really cool) on a bike ride and not worry about sweat damaging the unit.

The Voyager Legend weighs 18 grams and has up to 7 hours of talk time and 11 days of standby (from a full charge). We were able to have our headset easily last a week with moderate calling and some streaming of audio.

Pressing the button at the base of the boom mic automatically announces the talk time remaining and which device you’re connected to. The Voyager Legend can pair and connect to two devices thanks to its Multipoint technology, to allow users to answer an incoming device from either phone with the headset.

The headset will remain connected to whatever device that was last in use and to connect it to another you just select the Voyager Legend in that device’s Bluetooth menu. The headset can remember up to 8 of your devices. 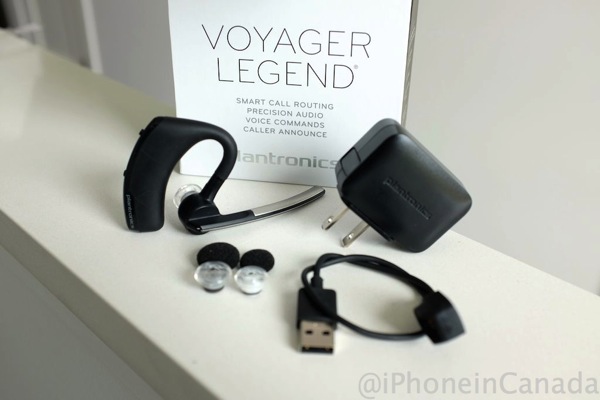 Plantronics debuted a newer Voyager Edge headset this year based on the design of the Discovery 975, which has an in-the-ear wearing style versus the over-the-ear of the Voyager Legend. The Edge also is able to be charged via microUSB, includes a charging case to extend talk time and can be paired via NFC, but also has the same features as the Voyager Legend.

It will come down to your needs and cost if you want to choose the right Bluetooth headset. The Voyager Edge retails for $130 MSRP, while the Voyager Legend, despite being a year old can be purchased for $78 from Amazon.ca (shipped free). Is the $52 difference for the Voyager Edge worth it? That’s for you to decide, but for new products you do have to pay to play.

Despite the short proprietary charging cable (it would be nice even if it was a few inches longer), the Voyager Legend is still a fantastic Bluetooth headset. It’s comfortable on the ear, even for long periods and can make life easier if you are constantly answering calls on your iPhone or smartphone with its auto answer and smart switching. Call quality is excellent and A2DP streaming enables you to listen to music wirelessly. Definitely a must-have for the office or car if you talk a lot on the phone.

Click here to buy the Plantronics Voyager Legend from Amazon.ca for $78–shipping is free (it’s currently the cheapest price in Canada).