iLounge has received their Lightning to 30-pin adapter and has posted an early hands-on review of the accessory, which retails for $35 in Canada ($29 USD). Their initial tests have revealed the adapter works with their old speakers for audio and power and also the transmission of data over cables, plus it is strong enough to support the new iPhone and iPod models in docks.

However, video output is clearly labeled on the package that it is not supported and iLounge was able to verify this:

However, the video limitation is equally real: we have been unable to get the iPhone 5 to perform video either through Apple’s own Component AV Cables, or through docking video accessories such as Epson’s formerly iPod/iPhone-compatible protectors. Additionally, it’s worth noting that this Adapter is not compatible with the vast majority of iPhone 5 cases we’ve seen so far; Speck’s CandyShell Flip is a notable exception. 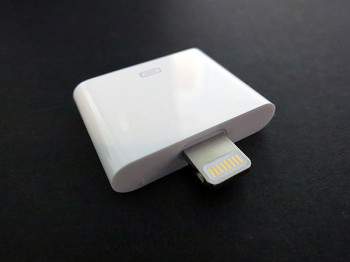 You can check out the rest of their Lightning to 30-pin adapter overview here.

Initially, during iPhone 5 pre-orders there was confusion as checkout pages noted the adapter was included, but this turned out to be false. Has your adapter shipped yet?