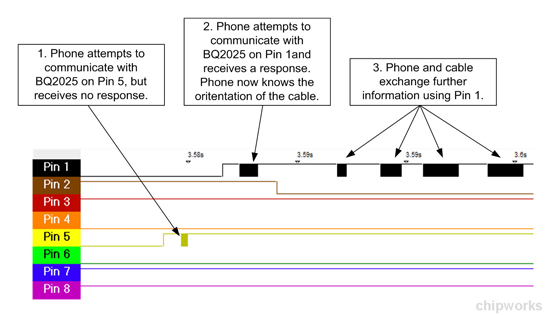 It has been widely known Apple’s new smaller Lightning connector contains authentication chips within it, but now we have some further details on how the company maintains strict controls over partners within its Made for iPhone (MFi) program. The New York Times shares details from an interview with accessory maker Mophie that sheds some light on the process.

Essentially, when manufacturers order Lightning connector components from Apple, they contain serial numbers and authentication chips to communicate with iOS devices. When a MFi partner submits an accessory to Apple for review, the latter is able to verify those particular connectors were purchased from Apple by that partner.

“If you took this apart and put it in another product and Apple got a hold of it, they’d be able to see it’s from Mophie’s batch of Lightning connectors,” said Ross Howe, vice president of marketing for Mophie.

The chip inside the Lightning connector can be reverse engineered — copied by another company — but it probably would not work as well as one that came from Apple, Mr. Howe said. Apple could also theoretically issue software updates that would disable Lightning products that did not use its chips, he said.

The last line could be troubling for non-certified third party Lightning accessory makers should Apple flick the switch and disable unofficial accessories.

Back in December, Chipworks detailed how the Lightning cable talks to your iPhone and concluded no authentication sequences take place, which is the opposite of what Mophie shares. Many have suspected the unlisted TIBQ2025 component to be the source of security within the Lightning cable. Even with this security in place, numerous third-party accessory makers have already successfully released unofficial Lightning accessories, such as docks and cables, to offset the limited supply of official accessories, thus lowering prices as well.

Just recently, Amazon.com released their own MFi certified Lightning cables, (Amazon.ca has third party cables priced at $6) and so did Monoprice as well, with both companies offering prices cheaper than Apple.