iFrogz Memorial Day Sale: 50% Off Everything!

iFrogz is a company that makes iOS accessories along with headphones that is now part of the ZAGG family. So that means they also qualify for the awesome 50% off Memorial Day sale, just like ZAGG.com.

Everything on the iFrogz.com website is half price, and that includes iPhone/iPad/iPod touch cases, the iFrogz Boost audio speaker, their Ear Pollution and iFrogz Audio headphones/earbuds and other accessories. You can get some decent deals as their catalogue is quite vast. Shop with a buddy and split the shipping cost to Canada. 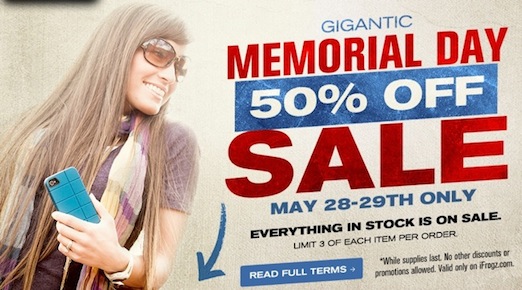 The started last night and ends Wednesday at 2:00 AM MDT. Final discounts will be shown during checkout and a limit of 3 discounted items of each product SKU per order.