Cut the cord between you and your iPhone and enjoy wireless stereo audio and Bluetooth headset functionality with the iSkin Cerulean F1 Wireless Bluetooth Headphones.

The Cerulean F1 is a premium Bluetooth headset that combines the functionality of a standard Bluetooth headset for making calls with headphones for listening to audio. In other words, the Cerulean can be used for phone calls and for wireless music playback. As long as your Bluetooth enabled device has A2DP, you will be able to listen to music using this headset.

The Cerulean F1 headset comes with two bluetooth looking headsets, both of which are used to listen to music wirelessly, hence the word headset. One on headset you have a built-in mic for taking calls via a mobile phone (iPhone) or VoIP and the other features an on/off switch. The only cable that is involved stays behind your neck hidden from sight andÂ connects the headset together. The Cerulean F1 is also rated for 33 feet of wireless range which was accurate.

The right earpiece also features numerous controls built into a multifunction button that allows you to pause/play music, answer/end calls and pair the headset. Volume controls are also located on this headset along the bottom, next to a small USB port used for charging. 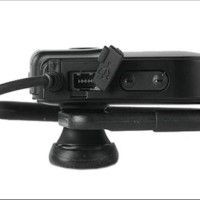 The headset is a small, light weight (35 g!) design that will be comfortable for people that are already used to wearing bluetooth headsets. For those of us that do not use bluetooth headsets often, you will have to get used to the comfort. In any case, iSkin provides a relatively secure fit with the headsets and included in the box are a few different ear hooks of varying size.

The battery life for the headset (calls) is rated for up to 10 hours and up to 8 hours for the earphones (music) with a standby time of up to 300 hours. In my uses, I received approximately 8 – 9 hours of use for either the headset or earphones. The charge time is rated at 2.5 hours, but I found the charge time to be approximately the same time that it takes my iPhone to charge, which is 3 hours.

In terms of audio quality for music playback, it was good. It was not great, but it was acceptable. Sound was quite clear and the bass was decent, but some music did sound slightly hollow. When compared with the iPhone Stereo Headset (normal headphones), I found that the sound with the stock iPhone headphones was much better but then you have to deal with the wires. However, if you are looking for crystal clear, perfect sound, this Bluetooth headset may not be the initial choice.

In terms of call quality however, the Cerulean F1 suffered. There were numerous times when the call had interference and would almost drop with a distinct fade out occurring. At first I figured this was simply a limitation of the wireless Bluetooth signal but my iPhone was at my side within 2 feet. So I pulled out the old iPhone Bluetooth Headset (now discontinued) and the call quality was night and day. There is a clear reduction in call quality with the Cerulean F1 and while the poor call quality did not occur with every one of the eight calls performed, it did occur in enough calls to warrant it an annoyance (3 times).

Overall, the iSkin Cerulean F1 headset provides a comfortable and nice design, stereo sound and cuts the cord between your iPhone and the headphones. However with the lacking call quality, I find myself considering the use of the stock iPhone Stereo Headset which guarantees me, more or less, a clear call everytime.

The iSkin Cerulean F1 Headset is scored a 3 out of 5.

The Cerulean F1 is available from the iSkin online store for $99.99.