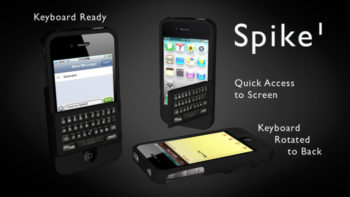 Kickstarter has always been a hot bed for new and cool inventions so it isn’t surprising to see new iPhone products seeking funding.

One of the newest projects seeking funding is a accessory that is part case and part keyboard. It’s called The Spike.

The Spike is brought to us from SoloMatrix, a Seattle based company founded in 2009. This is their first product.

According to the Kickstarter page:

“Spike is a combination keyboard and protective case that can be easily and securely installed in a matter of seconds. You can effortlessly rotate the bottom section of the case with the keyboard, to the back or the front of the iPhone, for storing in either typing or full-screen mode.  We’ve also hinged the keyboard, so you’ll always have quick access to the full-screen even when typing.”

What are your thoughts? Do you think something like this would be enough to convince your friends with a Blackberry to finally switch to the iPhone? Check out the video below: