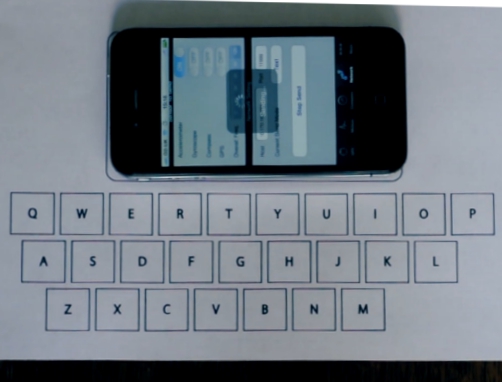 There is no question that smartphones and tablets are at the stage where they can replace our laptops and desktops for a variety of tasks –at least as far as power and capability are concerned. When it comes to comfort and ease of use, especially when you need to do a lot of typing, the iPhone can fall a little short.

Of course, there are plenty of keyboard options out there (like the backlit keyboard case from iPhone5mod.com), but they all require some kind of hardware to make it work, which means a certain amount of inconvenience. A new keyboard concept dubbed the Vibrative takes advantage of the iPhone’s accelerometer in order to detect vibration and sense the location of your fingers while you are typing on a virtual keyboard.

In an interview with the Goldsmiths student responsible for the Vibrative:

“The signals I’m collecting are very weak,” said Florian Kraeutli. “At the moment it’s more of a proof of concept but if you made the accelerometer more sensitive you could improve the accuracy quite easily.”

If the product works at all, Kraeutli should be thinking of a price…because this is exactly the kind of technology Apple should be looking to purchase for use in future models of the iPhone and iPad.