1Password for iOS is currently a free download right now. Normally priced at $17.99, it’s showing as free in the App Store. 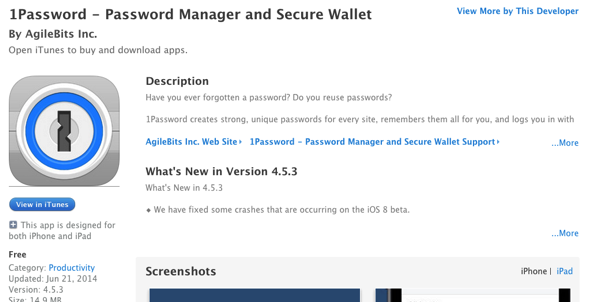 This is the password manager we use and it’s by far one of the best and the top app we always recommend. Oh, and it’s also Made in Canada by the cool cats from AgileBits.

We’re not sure why this is free right now, as the deepest discounts we’ve seen for 1Password are around 50% off, but rarely has it been listed as free. The app normally retails for $17.99 but was price-dropped to $9.99 last month.

Nevertheless, the spike in downloads should push 1Password to the top of the App Store rankings in time for iOS 8’s release tomorrow and the upcoming use of Touch ID for unlocking the app’s master vault.

Update: AgileBits has announced 1Password 5 for iOS has gone to a freemium model, which has an in-app purchase for the following new Pro features: