The word ‘selfie’ was named as Oxford Dictionaries Word of the Year for 2013 and how rightly so. The world has taken selfies to the extreme with Ellen’s recent Oscar tweet recently becoming the most retweeted of all time.

If only Bradley's arm was longer. Best photo ever. #oscars pic.twitter.com/C9U5NOtGap

In a recent throwback Thursday, retired U.S. General Colin Powell let Ellen know she was a ‘selfie’ rookie as he posted an image of him taking one 60 years ago.

Earlier this week TIME ranked the ‘The Selfiest Cities in the World’ by going through 400,000 Instagram photos tagged #selfie and noted Victoria (ranked 81) as the top Canadian city, followed by Edmonton (ranked 98) as the only two Canadian cities in the top 100 ranking.

Apple has also taken notice of the ‘selfie’ and yesterday during its weekly App Store update added a new section called ‘Sharing Selfies’, highlighting curated apps to help you take the perfect selfie: 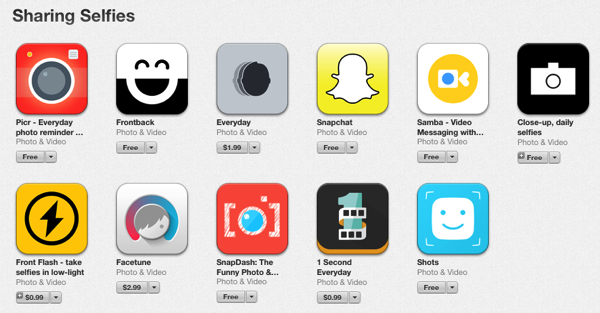 Click here to check out the new ‘Sharing Selfies’ section in the App Store. Let us know what’s your favourite selfie app!