Carrot Rewards has announced its nearly 1 million registered app users have tracked a combined 1 trillion steps on their platform, in Ontario, BC and Newfoundland, since its launch in the summer of 2016. 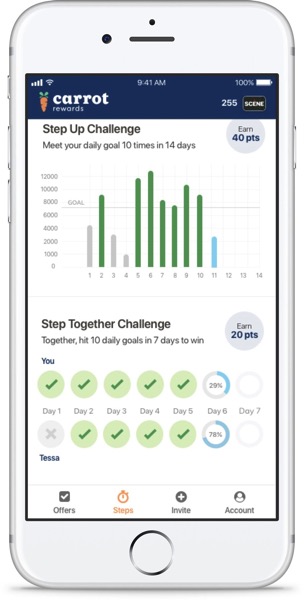 “We are thrilled to see the impact that Carrot is having in the lives of Canadians. Half of our users engage with us every single day to learn more about improving their health and wellness, and our users walk 20% more within their first six months on Carrot,” said Andreas Souvaliotis, Founder and CEO of Carrot Rewards, in a statement.

So far, app penetration has been at 12% in downtown Toronto, 10% in Newfoundland and Labrador and 8% in Vancouver.

The free platform aims to make itself free across the rest of Canada on November 1, 2018. The app can integrate into Apple’s Health iOS app for steps data.

Click here to download Carrot Rewards for iOS in the App Store. Use referral code garyn1465 to get bonus points for signing up (let’s be fitness friends).