A new health app is coming this fall, funded by the Government of Canada ($5 million) and Government of British Columbia ($2.5 million), to help Canadians live healthier lives.

Carrot Rewards will be available for iOS users in B.C. this fall as part of its pilot launch. Overall, the app will receive $15 million in funding from both public, private and non-governmental organizations over a five-year period.

The app aims to ‘gamify’ healthy living by rewarding small healthy actions with points, which app users can redeem for things such as groceries, flights or movie tickets. 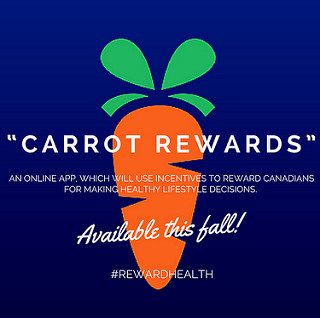 Social Change Rewards is working on the app with both levels of government, and CEO Andreas Souvaliotis tells Metro News the goal of Carrot Rewards is to get people to make healthier life choices, by getting them to do so without expensive traditional advertising campaigns.

The first 2 million sign ups will get extra points, so he believes the app will prove popular, noting “Canada is such a points happy society – Canadians love points – incentives in our country work very well.”

The cost of creating the Carrot Rewards app was just under one million dollars, while the rest of the funds will go towards project development and purchasing rewards.

The funds to create the app are a fraction of the hundreds of millions the government spends on annual advertising. Preventive healthcare is seen as more cost effective versus treating Canadians who end up with diabetes or cancer.

The Heart and Stroke Foundation, Canadian Diabetes Association and YMCA will play a role in the app to ensure the app stays non-partisan, with the power to veto any messages or notifications deemed political.

Carrot Rewards will launch in the App Store this fall, with B.C. residents first to pilot the app, with a further nationwide rollout to start in 2016, with a goal to reach one million Canadians in five years.

Sounds like an interesting idea that may work, but will be interesting to see if it can include everyone, not just those with a smartphone. Also, there’s an existing app named Carrot Rewards right now in the App Store (part of the Bangkok Mass Transit System), which may lead to confusion.