The Facebook iPhone app has suffered from constant bugs and crashes lately, and last night a new update was released to address these issues. Ever since Facebook started using a mobile feed, constant “No Internet Connection” messages would appear for me. After installing this update, the app would not even load. A complete delete and reinstall fixed the issue. Still, the app needs some work and at times their mobile version works even better than the app.

What’s New in Version 3.4.4
– Restored the Send button for Comments, Chat and Messages
– Restored friend lists to the News Feed filter
– Fixed a number of bugs that caused the app to crash 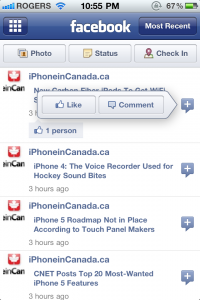