Google Photos for iOS has released a minor update today, to add 3D Touch support for iPhone 6s and iPhone 6s Plus users, along with some performance improvements.

The major feature is the addition of Quick Actions from the app’s home screen icon, providing the following shortcuts: 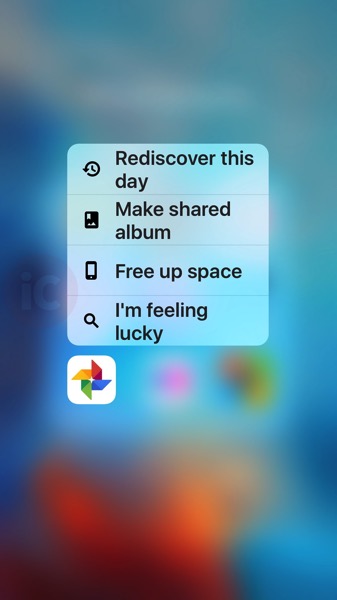 ‘Rediscover this day’ is a fun feature to see a flashback of a memory from years back, a feature similar to the one available from the default Photos app (try it).

As for ‘I’m feeling lucky’, it will randomly search your photos with term like “wedding”, “Christmas”, “birthday”, or the name of a location you’ve visited, which is also neat.

Google Photos for iOS is great because you get unlimited storage for your images up to 16MP, and videos up to 1080p. Not only that, the auto album and creation of GIFs, videos and more makes it an excellent alternative cloud backup for your photos.