Apple’s iTunes Festival, which is held annually in London during the month of July, is coming back in 2012 but will be held in September instead. The iTunes Festival 2012 will take place at London’s Roundhouse music venue offering 30 nights of free music for live attendees as well as to users of iPhones, iPod touches and iPads through the official iTunes Festival 2012 iOS app which is now available for download in the App Store (UK only). Performances that have been announced so far include acts from Usher (September 1), Emeli Sandé (September 5), Jack White (September 8), Norah Jones (September 10), and One Direction (September 20).

The iTunes Festival is coming back in September 2012. We’re inviting more than 60 artists to perform 30 consecutive nights of brilliant live music at the Roundhouse in London. This year’s spectacular line-up includes Usher, Jack White, Norah Jones, One Direction and more. Every ticket to the iTunes Festival is free—you can apply to win tickets to any performance.

If you can’t make the gigs, watch the shows live or view them afterwards for a limited time on your computer with iTunes, or on your iPhone, iPad or iPod touch with the iTunes Festival app. You can also stream the concerts to your big screen wirelessly using AirPlay and your Apple TV. 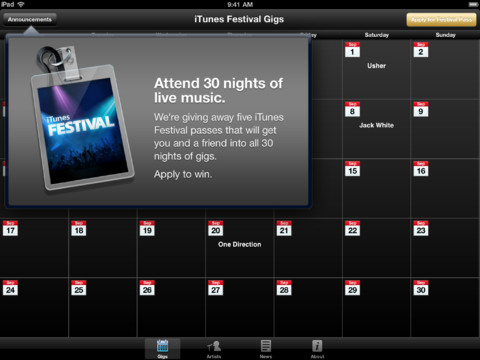 Like always, tickets are not available for purchase and can only be won through a lucky draw. To read more about how to participate, click here. Meanwhile, you can grab the official iOS app via the following link: