Back in December Mailbox teased its upcoming app as the ultimate Gmail experience on the iPhone. As of today, the company is accepting reservations for the app on its website here. The developers have decided to roll out the launch in waves to avoid the crushing demand:

In order to ensure that people using Mailbox have a reliable and lightning-fast experience, we’re going to follow the path of services like Gmail, Pinterest, and Spotify and use reservations to control the flow of new accounts. We’ve decided that the best way to do this is with as much transparency as possible, so our system is really simple: reserve your Mailbox today if you haven’t already, and once the app is in the App Store, we will begin filling reservations on a first-come, first-served basis. If you already signed up, you should receive a confirmation from us today or tomorrow. If you haven’t reserved your Mailbox yet, you can sign up now.

You will be sent an SMS with your reservation number along with a private code required to get access to your reservation when it’s ready. Mailbox will be free and will eventually add premium paid features in the future. 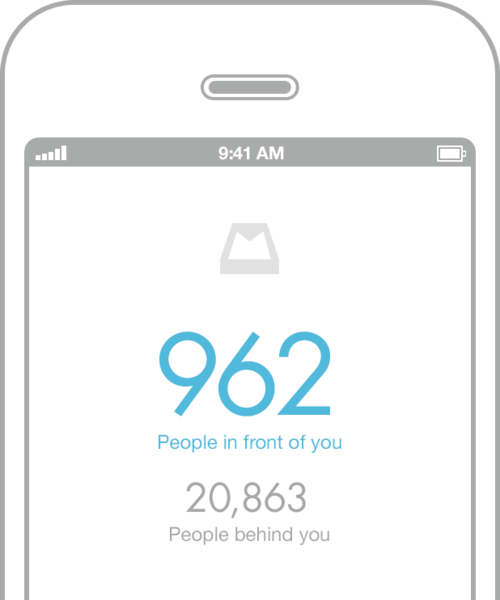 Mailbox noted on Twitter their reservation system is under a lot of stress but text messages should be sent out shortly. Let us know if you were able to secure a reservation!

Update: the following format should work for entering your number: +1112223333

Confirmations should arrive by today or tomorrow.

Update 2, 4:17pm PST: We just received our confirmation text from Mailbox (we submitted our phone number 5 hours ago): 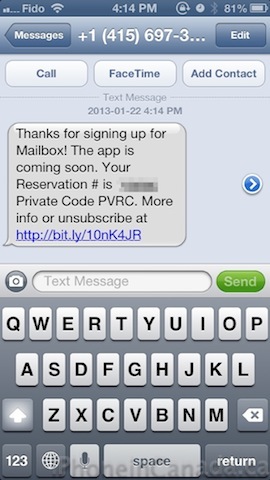 The link takes you to this Mailbox landing page. Anyone else get their confirmation text?