The 2014 FIFA World Cup kicks off in exactly one week and today the CBC launched their FIFA World Cup iOS app, to allow users to keep up with matches by viewing replays, reading news, and instant game time stats and highlights—to go along with live streaming of games:

Welcome to CBC’s FIFA World Cup app (brought to you by Bell). Experience FIFA World Cup™ soccer anywhere you are on your iPhone, iPad or iPod touch. Watch replays of the most exciting moments with our new multi-angle camera feature. Stay connected to the news and information you need including up-to-the-minute game time stats and instant highlights. 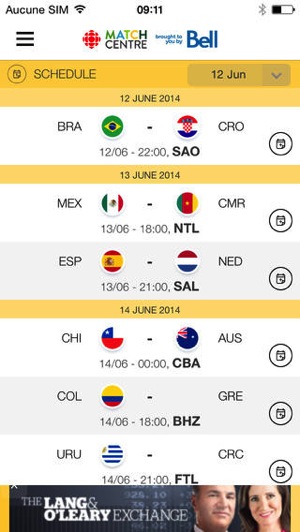 According to the CBC, the app will allow users to stream live games on their iOS or Android device, allowing users to choose from six camera angles on live feeds and replays. Once over, matches will also be viewable on-demand. The app will work over Wi-Fi and cellular networks.

“While watching the main match feed, the viewer will have some pretty amazing tools to truly get inside the game,” said Paul McDougall, Executive Producer of CBC’s coverage of the FIFA World Cup in Brazil.

The CBC notes the popular Sochi Olympics app was downloaded 2.5 million times and believes their new World Cup app will be even better. You’ll want to get this app folks!