Tweetbot is one of those twitter clients that quickly gained popularity due to its fresh intuitive design and interface. Its last update was released back in August which actually crowned it “the king of all Twitter clients“ bringing a super awesome feature called “Mute Filters”. Today, the developers of Tweetbot have pushed another update with full support for iOS 5 including system level Twitter integration using iOS 5’s “Single Sign-On” feature. 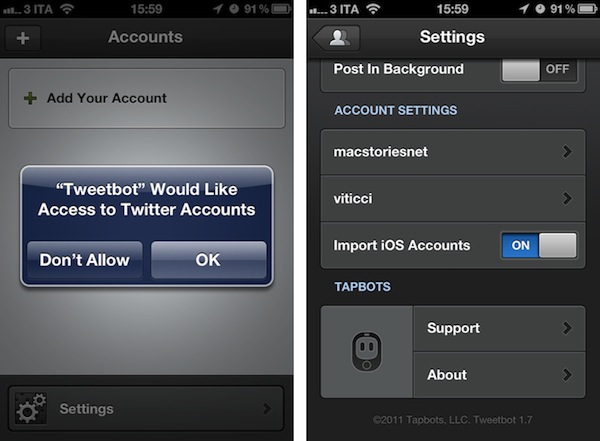 Here’s a brief explanation of single sign-on feature by MacStories:

Apple has already announced that developers will be able to use a feature called single sign-on to let their apps fetch Twitter credentials directly from the operating system, which has a new Twitter panel inside the Settings. Thanks to single sign-on, if a Twitter account (or multiple ones) are already configured in iOS 5?s Twitter settings, third-party apps like Tweetbot won’t need to re-authenticate users through a clumsy web view as they’ve been forced to do until today. They can simply get the account-related information from iOS’ Settings app.

iOS 5 is set to be released tomorrow i.e October 12th as officially announced by Apple at the recent iPhone 4S media event. So go ahead and download the new Tweetbot 1.7 update. On an iOS 5 device, you’ll notice you won’t have to re-enter your Twitter credentials again!