With the NHL Playoffs set to kick off today, being able to watch the game no matter where you are can be crucial if you’re a die hard fan (welcome to the dance, Leafs!). From the first round to the finals, all games will be available and with four Canadian teams in the playoffs this is going to be a great time of the year.

Rogers has reminded us today subscribers can watch live CBC Hockey Night in Canada playoff streams from the Rogers Anyplace TV iOS app. The app is free to download but requires a subscription to watch programming. 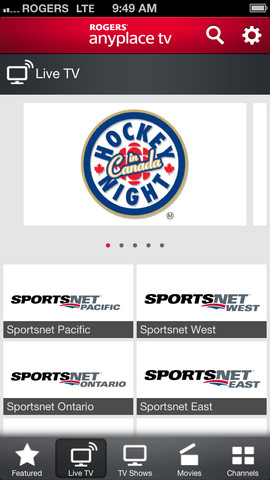 Rogers has a current promo offer for subscribers of the Anyplace TV app. Normally it is $5 per month for 10 hours of viewing (overage fees charged at $1/hour), but for now overages are waived until October 31, 2013. So you can pay $5 to watch unlimited TV on your iPhone, which is not bad if you’re stuck at work or somewhere without cable access and sketching out for playoff action.

Also, if you are activating a Talk, Text and Internet plan on 1, 2 or 3 year term you will also get free access to the app for the duration of your term. Let us know if you’re going to jump on this!