After surpassing 10 million messages handled per day, WhatsApp Messenger has been updated today with encryption for all messages send over WiFi and mobile networks. The team noted in twitter they had implemented “encryption for some time now,” but this latest update makes it publicly stated.

Other new features include a better message forwarding picker and a clock now replaces the previously gray spinner. Full release details below: 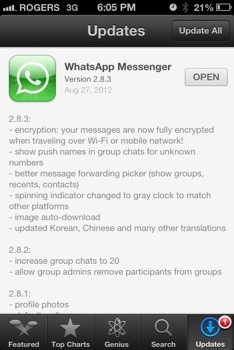 The application continues to be one of the top downloaded apps in the App Store since its release. It is one of the best ways to have group chats with friends on other platforms such as BlackBerry, Android, Windows Phone, Symbian and S40. The app allows users to easily send their location, pictures, videos, and audio notes.