WhatsApp for iOS has been updated today to enable users to send multiple images at the same time within chats, URL schema support for third party apps to integrate better with the app and iCloud support for backup and restores of your chat history and media.

As you can see from the image below, your Chat Backup has options to work automatically plus it will also save your pictures (not videos) to iCloud. The company says they spent six months working on implementing iCloud backups: 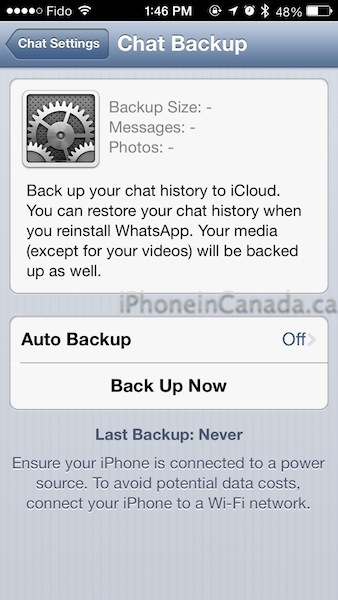 Let us know how you like this update and the new iCloud backup feature.

Update: WhatsApp has noted the app is now free and moving to its planned 99 cent per year subscription-based model:

First, we are updating our business model for new iPhone users going forward. As you know, we used to charge iPhone users a $.99 one time payment, while Android and other platforms had free service for the first year and paid $0.99 a year after that. From now on, we’ve simplified our business model so that all users on all platforms will enjoy their first year of WhatsApp service for free, and only pay $.99 per year after that. We feel that this model will allow us to become the communications service of the 21st century, and provide you the best way to stay in touch with your friends and family with no ads getting in the way. The good news for all current iPhone users is that WhatsApp will be free of charge for the rest of your life.