Zite started off as an iPad app (but later released an iPhone version) and has Canadian roots tied to the University of British Columbia. The app curates articles for you based on what you like to read and ‘learns’ your preferences as time goes along. The complex algorithms used within Zite impressed many, and it was eventually acquired by CNN last year.

In a recent blog post, the Zite team notes it has grown triple in size and launched a plethora of projects such as launching on other platforms. But the most important announcement was the introduction of their first project with their parent company, known as CNN Trends. 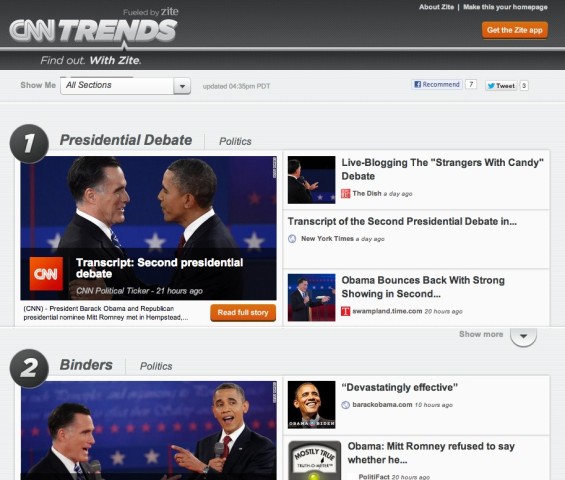 Zite notes how CNN wanted them to make a better way for readers to digest trending stories on their website:

One of the insights that we came to was that users care about what’s trending overall, not just on CNN.  And, though CNN covers most every major event, users also want to see perspectives from different sources.  Thus, the CNN Trends project was born.

With CNN Trends, users are able to see the top 10 most-discussed subjects for the day, alongside a headline article and links to other interesting analysis on the story subject. What is magic here is the page is generated automatically with an algorithm, and note curated by a human.

It’s all possible  as Zite implemented the technology they used within the Zite app and applied it to CNN Trends, which shows stories that are talked-about and interesting.

Zite notes they will continue to improve CNN Trends based on user feedback but reassures us that 80% of their office is still dedicated to their app.

After checking out the CNN Trends page, it seems to be a quick and easy way to digest some of the trending stories around the world–the current 7th spot is the Foxconn story on its use of underage workers.