Zwift is an online 3D world that allows cyclists to ride with others virtually, using their indoor cycling equipment such as their road bike hooked up to a trainer. Normally, the platform requires a Mac or PC, but now the iOS version is available for download. 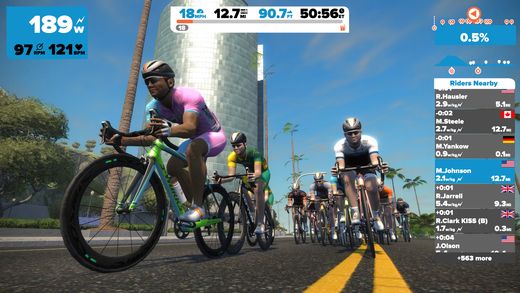 There are limitations with the iOS launch, as only Bluetooth cycling speed sensors, cadence sensor, heart rate monitors, power meters or smart trainers are supported. So if you have a bunch of ANT+ wireless sensors, you’re out of luck, as iOS devices don’t support Garmin’s proprietary technology. 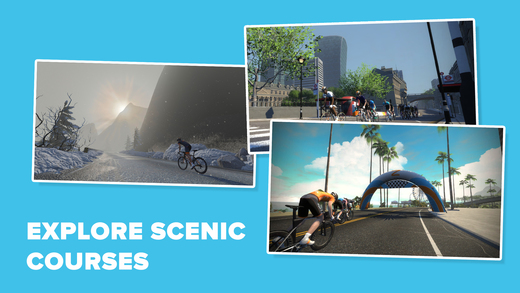 What’s the cost for Zwift? It’s $9.99 USD per month and there’s the option to subscribe via in-app purchase.

Zwift for iOS will support the following devices:

With this first release, the Zwift team says “there may be a few bumps along the way.” Previously, they were testing the iOS beta version with the community’s most active cyclists.

Why use Zwift? When winter sets in and its gets cold, wet and gross out, you can either ‘harden up’ (Rule 5) and still ride outdoors, or you can take your cycling fitness indoors. I’m currently using Zwift once or twice a week to keep my riding level up during the winter, using a Kinetic Road Machine 2.0 fluid trainer.

I don’t mind paying to ride with Zwift during the worst months of the year, so the $10 per month charge isn’t that bad when you think about it.

There are some cool courses you can ride around, such as actual courses of London, or other courses in Zwift’s virtual world. By bringing a competitive element to riding on a trainer, it definitely makes it more interesting to ride indoors.

Here’s a video of what Zwift can do for indoor cycling—check out their promo video below:

Soon, there will be Zwift for running as that’s currently in beta. For iOS users, this may be more useful since all you need is a Bluetooth sensor for your shoes to connect to, then you can virtually run against others on a treadmill at the gym with your iPhone.

Click here to download Zwift for iOS in the App Store—It’s free and is 544MB in size.