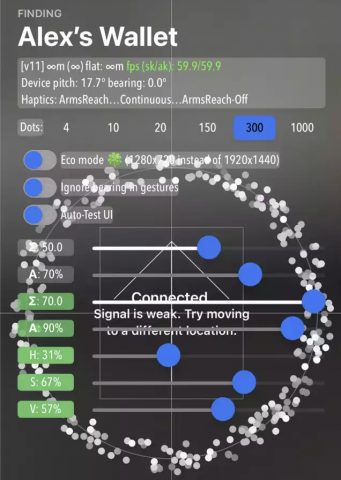 A Reddit user by the name of Alex Magri-Olson accidentally stumbled onto Apple’s debug mode for its AirTag after becoming frustrated by the tracker’s performance.

Magri-Olson’s thread was posted on the r/Apple subreddit and was discovered by 9to5Mac. In the thread, Magri-Olson talks about his frustrations using the AirTag and how the first one used failed to connect to his device after four attempts. Finally, once connected, Magri-Olson said that it failed to show a strong signal for anything “outside of 0.8m/2.6ft away”.

Out of frustration, Magri-Olson tapped on his name while in Precision Finding interface four or five times and discovered a hidden debug mode. Within the debug mode, the screen displays real-time diagnostics of the AirTags, accelerometer and gyroscope coordinates, screen resolution, tracking animations, haptic feedback information, and other general technical information. There are also a series of sliders said to adjust camera resolution as well as control the dots on the screen within the Precision Finding interface menu. The debug mode is said to accessible on iOS 14.5.

Overall, there isn’t too much within the debug mode that would be useful for the everyday AirTag user. Apple developers will likely remove access to the debug mode in a short time now that news of it is gaining traction. That said, its discovery did provide a neat peek behind the curtain regarding the iPhone’s calibration when Precision Finding is activated.