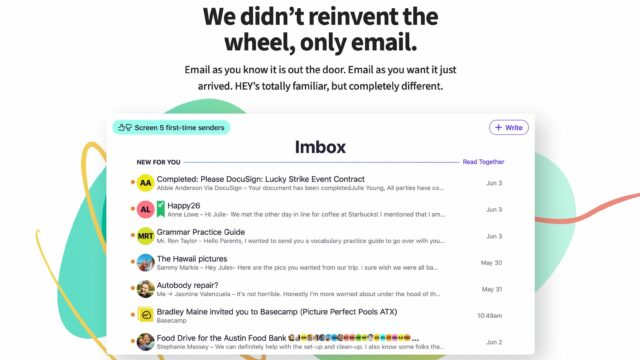 Apple is threatening to remove Basecamp developed email subscription app Hey.com from App Store. The company has previously approved Hey.com, which launched on Monday. However, due to Basecamp’s subscription model, Apple has threatened to end bug fix support and pull the app from the App Store.

Protocol reported on this story after Basecamp CTO David Heinemeier Hansson became more vocal on the matter at hand. He informed the outlet that after the email service became public on the App Store, lead iOS developer Zach Waugh received a shocking email from Apple. Upon prepping the second version of Hey.com to help patch bugs, it was rejected from the App Store reviewers.

Wow. I’m literally stunned. Apple just doubled down on their rejection of HEY’s ability to provide bug fixes and new features, unless we submit to their outrageous demand of 15-30% of our revenue. Even worse: We’re told that unless we comply, they’ll REMOVE THE APP.

This turmoil stems from Basecamp’s subscription model. Hey is available with a subscription of $99 per year. As with other services with similar subscription models such as Netflix, Hey users can’t sign up or pay within the iOS app. While Apple has made exceptions as to which apps can offer this model, it appears Basecamp’s Hey is not included. A large point of contention is that if Basecamp offers subscriptions outside of the iOS app, Apple would not gain its cut of the revenue.

Spotify, like Netflix, does not offer in-app purchases or subscriptions. Instead, Spotify users would have to create their accounts elsewhere and sign-in on the iOS app. However, Apple has given an exception to apps that have been classified as “readers”. This classification exempts apps such as Netflix, Spotify, Slack, etc from being barred for not offering in-app purchases on iOS. Hey, however, is apparently not considered a “reader” app.

This dispute comes the week that the EU launched two anti-trust investigations on Apple. The first was regarding Apple’s App Store and previous claims that the company has a “gatekeeper role”. Spotify has also made complaints that the company’s commission and revenue demands are unfair.

Protocol reached out to Apple who told the outlet that the approval of the app in the first place was a “mistake”. Business services where users cannot sign up are allowed by Apple, but not consumer products. The Apple representative stated that the app “must have a way for users to sign up and pay through Apple’s infrastructure.”

Hey’s development team appears to be firm on their stance to not pay Apple the 30% cut. Heinemeier Hansson said: “”There is never in a million years a way that I am paying Apple a third of our revenues. That is obscene, and it’s criminal, and I will spend every dollar that we have or ever make to burn this down until we get to somewhere better.”