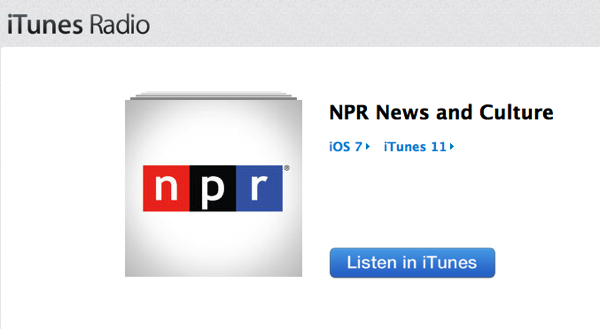 As we say at NPR: radio isn’t going away, it’s going everywhere. Today we’re excited to share the news that NPR has become the first news provider on . Our 24-hour stream includes national newscasts, stories from Morning Edition and All Things Considered, and other news and cultural programming.

And what you hear today is just the start of what’s to come. In the future, digital streams from NPR Member Stations across the country will begin appearing on iTunes Radio, NPR announced in a blog post.

NPR has been available in mobile apps and via Web browsers for quite some time, attracting 30 million visitors per month; but as the move toward iTunes Radio shows, NPR is open to increased exposure.

Apple’s music streaming service has gained traction during its short life: according to a survey published by Edison Research, iTunes Radio is the third-most popular service in the US, and is on course to take second spot by the end of the year.