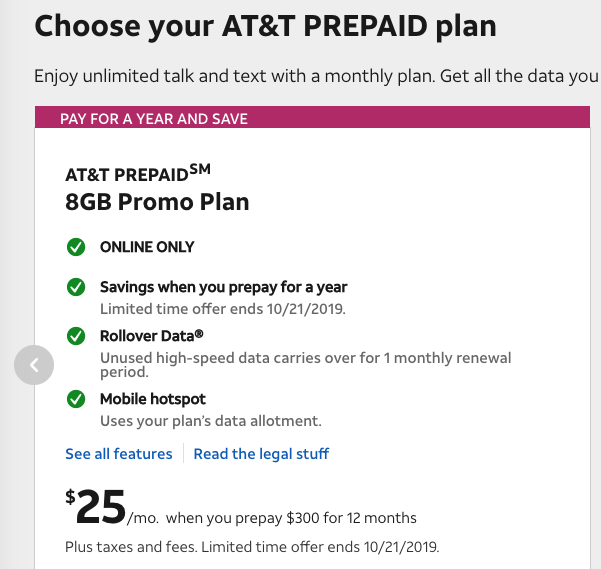 If you’re a Canadian ‘snowbird’, AT&T has launched a new prepaid promo in the United States, worth considering.

The plan includes unlimited talk, text and data in Mexico and Canada, mobile hotspot, high speed data, and rollover data for one month. Data is at LTE speeds for 8GB, then after it’s throttled to 128 Kbps. Your plan renews every 30 days.

For Canadians who travel down south for the winter, or head to the U.S. frequently, this prepaid plan may be appealing, since you can also roam with data back in Canada (AT&T roams on the Rogers network here). Rollover data cannot be used in Canada.

Downsides of this prepaid plan is that you’ll have a U.S. number, as there isn’t a way to port over a Canadian number to AT&T. Also, AT&T says “if you use roaming data services in Mexico or Canada on a wireless carrier network other than AT&T, your data usage may be reduced to 2G speeds. For complete terms visit att.com/prepaidterms.”

Again, this plan is good for those living close to the U.S. border and travel there frequently, or those willing to get an American number to use in Canada, to save money versus paying voice and data prices here.

Just for reference, a 7GB plan with Fido, for example, currently costs $65 per month, which does not include roaming to Mexico or the U.S. The closest thing to this AT&T deal is Videotron’s prepaid brand Fizz, offering a $36/8GB plan, but does not offer U.S. roaming either.

Are you willing to jump through some hoops to use an A&T prepaid plan in Canada?