PCMag has released their report on the Fastest ISPs in Canada for 2018, and Bell has taken the overall spot this year, taking the crown away from Rogers.

According to the publication, nearly 12,000 tests were taken between September 15, 2017, to June 5, 2018, via their pop-up PCMag Speed Test. Here’s how they calculate their PC Mag Speed Index (PSI) scores:

We concentrate on an ISP’s throughput up and down, recorded in kilobits per second, which we divide by 1,000 to get to Megabits per second, or Mbps. We take 80 percent of the download speed, 20 percent of the upload speed, and add those to generate a PCMag Speed Index (PSI). That number makes it easy to perform an at-a-glance determination of exactly which ISP is the fastest, as well as make quick comparisons to results from previous years. 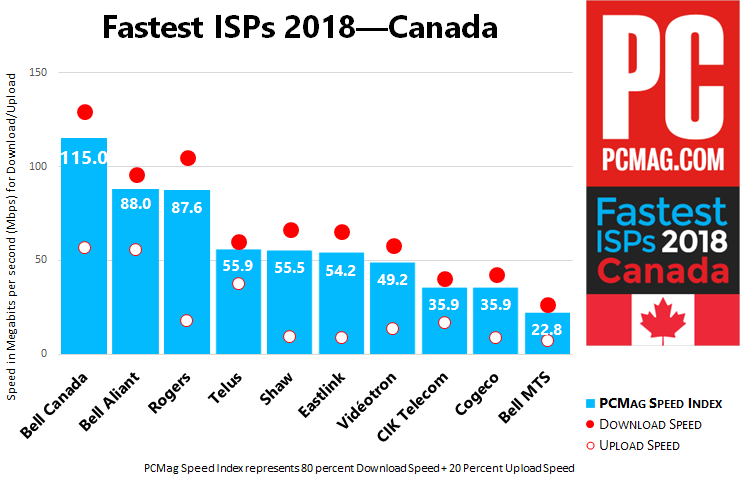 According to PCMag, Bell more than quadrupled their PSI score of 27 from last year, mainly due to the success of Bell Fibe, the company’s fibre-optic network. But all over ISPs also increased in speed, as Telus went from 22 to 55.9, Shaw from 30.3 to 55.5 and Eastlink from 37.8 to 54.2.

When it comes to fastest ISPs by province, here’s what PCMag concluded:

When it comes to major cities PCMag has data for in Canada, here are the scores:
In a statement issued to iPhone in Canada, Rizwan Jamal, President of Bell Residential and Small Business, said “Bell’s strategy to lead investment and innovation in Canada’s next-generation broadband networks is delivering the best Internet experience to both consumers and business customers,” adding, “With the fastest connections today and the capacity to deliver the virtually unlimited broadband speeds of the future, Bell’s pure fibre network offers Canadians access to the best Internet technology in the world.”
Which ISP are you using right now? Are you happy with your download speeds?

The evidentiary portion of the Competition Bureau's federal Competition Tribunal hearing against Rogers and Shaw over their proposed $26 billion merger came to a close on Thursday, following 18 days of testimony, parades of witnesses, and strenuous cross-examination (via The Globe and Mail). Oral arguments from the two sides are scheduled for December 13 and...
Nehal Malik
9 hours ago