In November of 2011 the CRTC ruled against usage-based billing (UBB) for internet (the Harper government stepped in to reverse it), after they initially approved a plan for internet providers to implement UBB. Now, with the CRTC set to rule what smaller independent internet service providers (that purchase bandwidth at wholesale from the likes of Bell and Rogers) will pay for wholesale internet, it is believed prices will eventually drop compared to before. 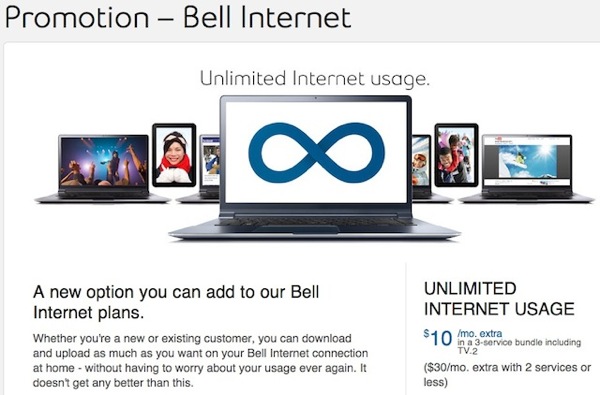 Coincidentally prior to the CRTC announcement, both Rogers and Bell are offering promotions for unlimited internet reports the CBC, a change from before when internet bandwidth was capped, with telcos long arguing the latter helped control network congestion. Canada has long been notorious for having some of the highest bandwidth prices in the world.

Rogers and Bell have similar offers where customers with bundles can pay $10/month extra for unlimited bandwidth and those without bundles will be charged $30/month extra. Videotron in Quebec also looks to be jumping into the unlimited internet too for $10/month.

Savvy internet users would be wise to wait until indie ISPs have a chance to digest the CRTC’s ruling before locking into the big guys’ extortionately identical plans. Many indies have continued selling large or unlimited plans during this whole usage-based-billing saga, but this week’s ruling should give them some final clarity on what sort of prices they can offer in the long term. Cheap, affordable internet without a host of limitations looks to be just around the corner.

This isn’t the first time telcos have unveiled new options for consumers prior to CRTC announcements. Just prior to the CRTC proceedings on its draft wireless code, Rogers announced an update to its cellphone unlocking policy.

With consumers consuming so much bandwidth nowadays thanks to YouTube (blame Harlem Shake/Gangnam Style videos) and streaming services such as Netflix, internet usage will continue to increase. What do you think about the state of internet offerings in Canada?

Here are the latest Canadian cellphone plan and device deals, plus other promos from wireless carriers such as Rogers, Telus and Bell, from our partner PlanHub. As always, the promos may change at the last minute, but here they are as of Wednesday, November 30, 2022. Check them out below… Bell Noticeable price changes: Get iPhone 14 […]
IIC Deals
15 hours ago

Canada's Commission for Complaints for Telecom-television Services (CCTS) today published its 2021-22 Annual Report. The CCTS is a national and independent organization dedicated to resolving customer complaints about telecommunications and television services, fairly and free of charge. It deals with complaints regarding billing errors, compliance with contract terms and commitments, service delivery, credit management, and...
Nehal Malik
19 hours ago