The latest plans from Telus and Bell now come with more expensive data overages, as Canadians will now pay the price for going over their allotted data buckets.

The company told MobileSyrup these price increases only apply to new plans and will not affect existing customers on previous plans.

Bell’s website notes “additional data is $0.10/MB” at the bottom of their wireless plan page when selecting a data option: 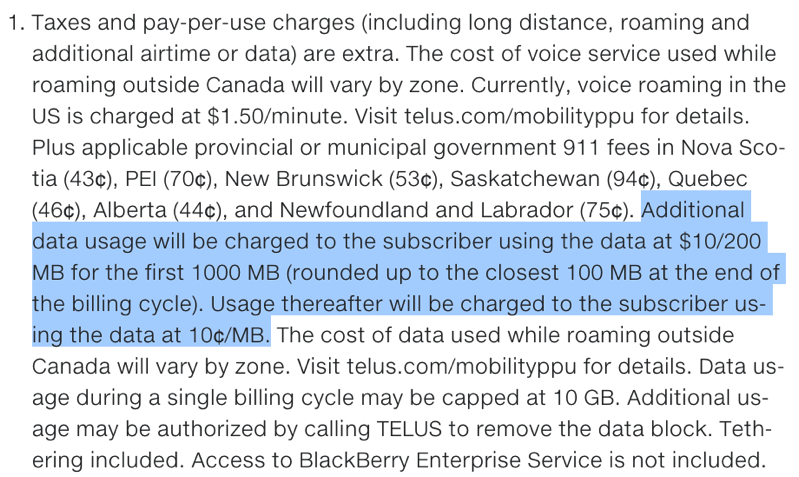 As of writing, the Rogers website still notes data overages are billed at $7/100MB, but given how wireless prices surprisingly increase at the same time in Canada, expect a matching increase at some point in the near future.

As for flanker brands Fido, Virgin and Koodo? If parent companies increase the price of data overages, expect it to be a change across the board, but for now, they remain at $7/100MB.

It’s worth noting the CRTC Wireless Code says carriers must limit domestic data overages to $50 in a billing cycle. Any usage after that requires consent from a customer to continue. Exactly one year ago, Rogers increased the price of its data overages from $50/1GB to $70/1GB, and Bell and Telus followed shortly with the same increases.

The Canadian government on Wednesday announced the results of a residual spectrum auction that concluded on January 17. Residual spectrum auctions are a way for Innovation, Science and Economic Development Canada to sell licences that weren't sold in previous auctions or were returned. Ottawa held an auction for the 3,800 MHz bands in June 2022,...
Nehal Malik
9 hours ago

SaskTel announced on Wednesday it has started rolling out its 5G wireless network to the Battlefords, offering faster download speeds. The Saskatchewan crown corporation says it recently debuted its 5G network in the Town of Battleford, but expects all of Battleford and North Battleford to have full access by the summer of this year. “Our […]
Gary Ng
13 hours ago