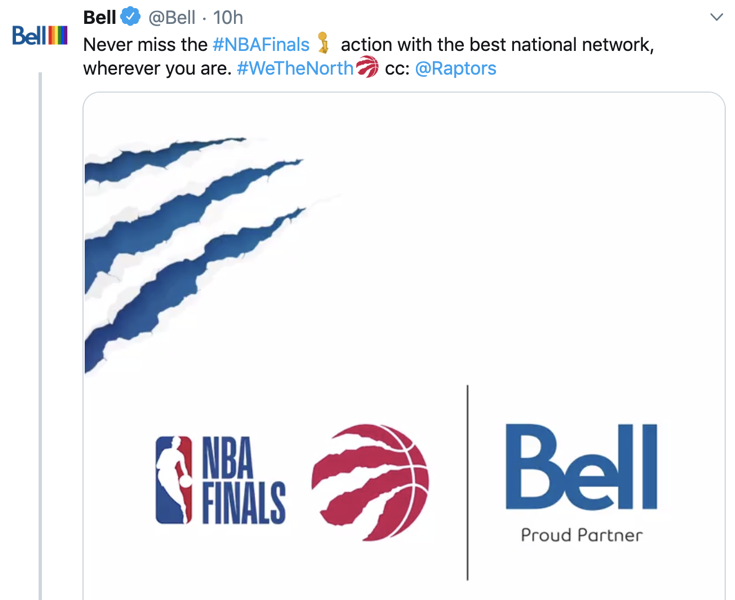 The Toronto Raptors lost Game 5 of the NBA Finals yesterday, as the defending champions, the Golden State Warriors, weren’t done justt yet.

But for some Raptors fans subscribed to Bell Fibe TV and Alt TV, they missed the most crucial final moments of Game 5’s nail-biter finish.

Down Detector noted the outage started at 8:44pm PDT/11:44pm EDT—check out the spike of reported problems last night:

Angry Bell customers were quick to voice their frustration on the outage on Twitter, quoting a Bell tweet which touted its television service earlier in the day.

“Never miss the #NBAFinals action with the best national network, wherever you are,” said Bell before Game 5.

Ironically for Bell TV customers, they lost signal during the final minute or 30 seconds of Game 5. After Kawhi Leonard caught fire to bring the Raptors back in the lead (and only to get iced after Toronto’s questionable time out), emotions were running high for fans, only to see their TV signal suffer an outage, right when the Raptors had the final possession to win the game. Ouch.

Below are some of the responses from Bell TV customers watching Game 5:

We lost our Bell TV signal with 29 seconds left in the #Raptors game. It came back on a couple of minutes after the game was over. Typical Bell. #RaptorsInSix

Really??? Because this is what I got for the last few minutes of the game #slowclap #notimpressed pic.twitter.com/oyUZjdo32L

I called and your tech told me there was no outage… Pretty amazing coincidence that all these other people happened to drop at the same time I did @bell what a crazy world! You could almost say thesr looked like connected incidences!

@Bell 30seconds left in that raptors game and you error out? There are allot of people that are very disappointed!! Get ready for Bell Customers coming Full Throttle at you Bell!!

My wife and I missed the last 30 seconds of the Raptors game because your service crashed on us. Poor girl just went to bed feeling guilty because it was her decision to switch to Bell.

We're actually thankful the Raps lost, because missing the win would have been so much worse

1/2 Hey @Bell thanks for my altTV crashing with 30 seconds to go in the Raptors game. Not impressed at all. Should have never switched from @cogeco according to your tech I need to disconnect every connected device once a month, reboot my modem and re add every device to watch tv

Way to cut the broadcast short. You're lucky we lost the game, or I think every single @Bell customer would have moved over to @Rogers.

The @Raptors may have been defeated but the real loser tonight is @bell for dropping signal for fans across the country with 29s left in the game. I call foul!!!!

Did you have any issues with your Bell TV service yesterday during the final seconds of Game 5? We’ve reached out to Bell to seek comment on the matter and will update this post accordingly.

Several thousand customers who use our Fibe TV app, including Alt TV customers, lost service for approximately 10 minutes last night due to a hardware malfunction. The outage impacted all channels on the app, including the final moments of the Raptors game.

Fibe TV and Satellite TV customers watching on their set-top boxes were not affected.

The spokesperson added, “We’re apologizing to customers affected by the outage and will be offering all of them goodwill credits.”