Last week we told you about how some existing Virgin Mobile customers were able to get a $56/10GB BYOD loyalty plan, by calling in and talking to the retentions department. Many users had mixed results in being able to nab the plan.

But today, it appears Virgin Mobile is making it easier to get the $56/10GB BYOD promo plan, for existing customers. Numerous iPhone in Canada readers have noted they were able to get the plan just by calling in or using the Virgin Mobile iOS app’s chat feature.

“I also got this plan – didn’t have to go through retention dept, just straight up dialed 6-1-1. My wife called through the Virgin MyApp and also received it,” writes Darren.

Reader bionicmonk said, “Just called Virgin mobile and got this plan, didn’t even have to go through retentions,” and shared details of the plan below: 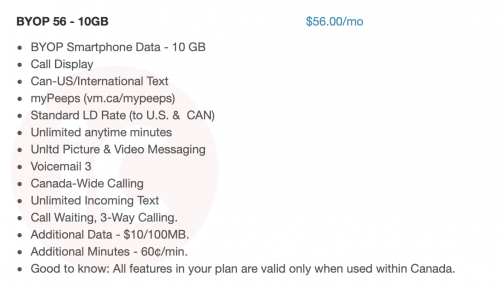 The discounted BYOD plan may be Virgin Mobile’s attempt to retain customers from switching over to new ‘unlimited’ plans from Rogers and also Telus’ promo $75/15GB BYOD plan. Parent company Bell also has promotional ‘unlimited’ plans just like Rogers, available until the end of the month.

Again, if you tried to call Virgin Mobile last week to get this $56/10GB BYOD plan, give it another shot today, because it seems much easier to nab it on the front lines, without the need to speak with retentions.