You Can Stream ‘The Batman’ on Crave Starting April 18 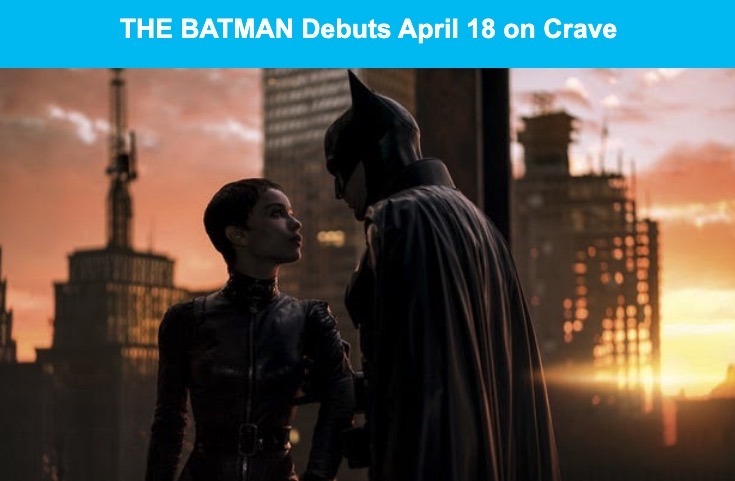 Bell Media confirmed on Monday the Warner Bros. Pictures film, The Batman, will make its streaming premiere on Crave starting April 18, as part of its HBO Max offering.

The Batman stars Robert Pattinson and debuted in Canadian theatres on March 4, 2022. The film’s synopsis is below:

Two years of stalking the streets as the Batman, striking fear into the hearts of criminals, has led Bruce Wayne deep into the shadows of Gotham City. With only a few trusted allies amongst the city’s corrupt network of officials and high‐profile figures, the lone vigilante has established himself as the sole embodiment of vengeance amongst his fellow citizens. When a killer targets Gotham’s elite with a series of sadistic machinations, a trail of cryptic clues sends the World’s Greatest Detective on an investigation into the underworld, where he encounters Selina Kyle/aka Catwoman, Oswald Cobblepot/aka the Penguin, Carmine Falcone, and Edward Nashton/aka the Riddler. As the evidence begins to lead closer to home and the scale of the perpetrator’s plans becomes clear, Batman must forge new relationships, unmask the culprit, and bring justice to the abuse of power and corruption that has long plagued Gotham City.

The Batman spans 2 hours and 56 minutes and so far has grossed $735.1 million USD worldwide at the box office, an impressive number despite the ongoing COVID-19 pandemic.

If you recently purchased a Samsung Galaxy Z Fold4 or Galaxy Z Flip4, you can get a promo code to stream the 2022 FIFA World Cup free on TSN for six months, as part of a recent freebie. According to Samsung, it explains “once you have received your eligible Galaxy Z Fold4 or Z Flip4 […]
IIC Deals
7 days ago