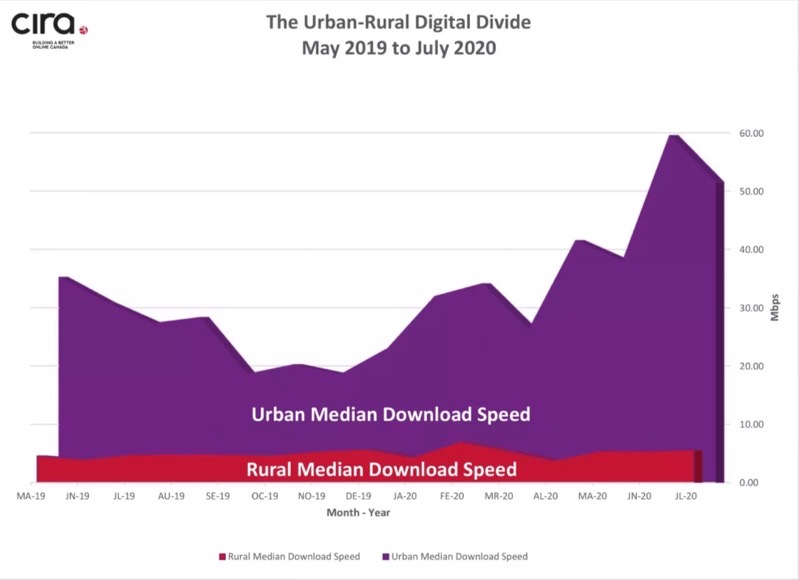 According to the Canadian Internet Registration Authority’s (CIRA) latest Internet Performance Test, the data shows an ongoing urban-rural divide when it comes to internet speeds, especially during the first five months of COVID-19.

The CIRA says for the month of July, “median download speeds received by rural Canadians was roughly 10 times slower than those experienced by their urban counterparts.” Urban internet speeds have continued to “steadily improve” and outpace those in rural areas since the beginning of the pandemic.

“The COVID-19 pandemic has put Canada’s reliance on high-quality broadband into sharp relief, and, unfortunately, today’s data shows that rural internet users are falling behind in terms of speed and quality. We eagerly await the first funding announcements from the government’s Universal Broadband Fund and the CRTC’s Broadband Fund. We urge the federal government, CRTC, and local levels of government to expedite the rollout of broadband funding to help ensure all Canadians have access to faster internet as soon as possible,” said Byron Holland, CIRA’s president and CEO in an issued statement.

In July, rural download speeds were clocked at a paltry 5.62 Mbps, versus 51.54 Mbps in urban Canada, a ten times difference.

Rural users also see upload speeds that are “consistently 10 times slower than urban speeds, on average,” says the CIRA, and have since been falling since COVID-19 began.

The Canadian Radio-television and Telecommunications Commission, the country’s broadcasting and telecommunications regulator, announced on Monday morning its website and phone lines are down for the count, in what appears to be an unscheduled outage. “Please note that our website, its related applications and phone lines are temporarily unavailable, we will update you as soon as […]
Gary Ng
11 hours ago