The CWTA has announced updated numbers for text messages sent in Canada, with 24 billion person-to-person texts occurring in Q1 2013, an average of 270 million per day.

Check out the graphs below to see the evolution of text messages sent in Canada: 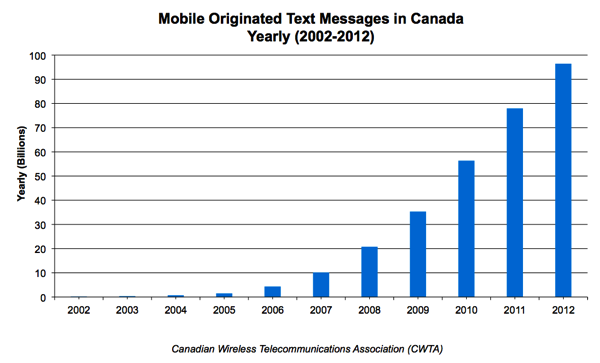 How many text messages do you send everyday? Do you even talk to people anymore?

[caption id="attachment_382081" align="aligncenter" width="1000"] Image: Bell[/caption] As Hurricane Fiona makes landfall in Atlantic Canada, telecommunications services are more instrumental than ever in ensuring that Canadians can stay connected with their loved ones and emergency services. To that end, Industry Minister François-Philippe Champagne is organizing telecom operators in the impacted areas to "ensure their services are...
Nehal Malik
6 hours ago