The Communications, Energy and Paperworkers (CEP) and the Canadian Auto Workers (CAW), two of the largest unions in Canada plan to rally this Friday in downtown Toronto against a Verizon “takeover”. 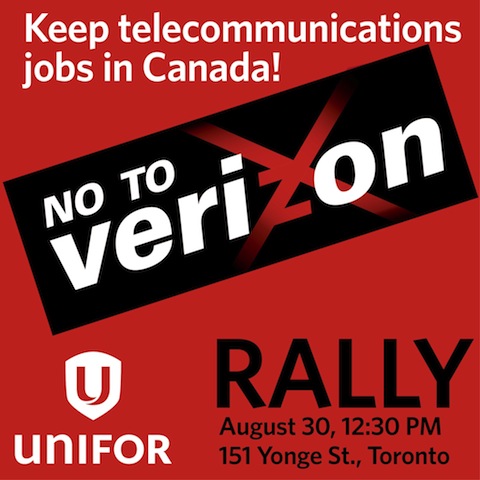 As for the Verizon rally, union presidents had this to say:

“Opposition to allowing Verizon to take over our Telco industry is growing every day,” says CEP President Dave Coles. “The deal will give Verizon the green light to piggyback on technology built by and for Canadians, and put thousands out of work.”

“There is the falsity being circulated right now that allowing Verizon in Canada will automatically lower costs for consumers,” says CAW President Ken Lewenza. “Not only will this not be the case, Canadian jobs are at stake.”

CEP President Dave Coles told the Huffington Post the rally isn’t to defend Rogers, Telus and Bell–but rather standing up for Canadian jobs and security:

“We’re offside with [Bell, Rogers and Telus] on all kinds of issues. We’ve had big strikes. This isn’t an industrial relations issue, this is a nation-building issue. You can be on the same side yet disagree on all number of things, that’s what a democracy is about,”

Cole went on to explain he expects to see 2000 to 3000 people “at least” to show up, to essentially send a message to Ottawa:

“It is to bring attention to the total failure of the Harper Conservatives’ Canadian telecommunications strategy.”

“There’s nothing factual that is coming out of the Conservatives, particularly the prime minister’s office, that has anything related to reality.”

Both unions have formed a new union called Unifor, which aims to “advocate for and defend the rights of working people, in more than 20 economic sectors and in communities across Canada,” and will formally unite at a convention on Saturday, making it the largest private sector union in the country.

Previously, we have seen other unions publicly protest Ottawa’s wireless plans, such as the Telecommunications Workers Union (TWU), representing workers from Shaw and TELUS across Canada. The CEP also previously addressed national security concerns regarding Verizon just over a week ago.