The CRTC has announced it is now taking submissions from Canadians to help develop a mobile code when it comes to wireless terms and conditions (an issue that was previously brought up in April, which the ‘Big 3’ carriers supported):

“Our goal is to make sure that Canadians have the tools they need to make informed choices in a competitive marketplace,” said Jean-Pierre Blais, Chairman of the CRTC. “In the past, Canadians have told us that contracts are confusing, and that terms and conditions can vary greatly from one company to another. We are asking them to assist us in developing a code that will help them better understand their rights as consumers and the responsibilities of wireless companies.”

Canadians are therefore invited to share their views on:

If you want give your input on the views listed above–fill out the online form here, as seen below. The deadline for submissions is November 20th, 2012. 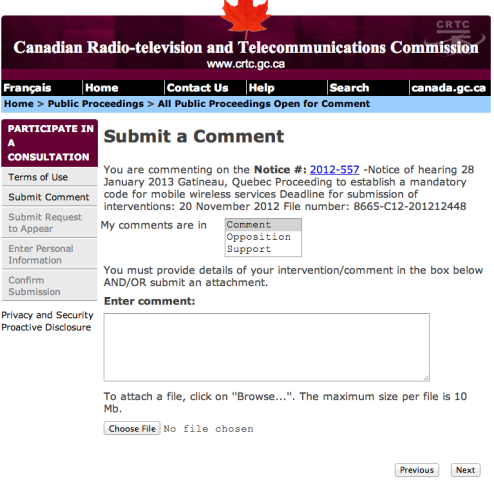 The CRTC has stepped up their pressure recently on our wireless carriers to create a registry to track stolen smartphones due to ‘iCrime’, or they would impose it via legislation.

What do you think should standards in the development of a new national wireless code?