Looks like new wireless options will be available for those on the East Coast, as Eastlink will launch its 4G LTE network on Friday, reports the Globe and Mail.

The company, a subsidiary of Bragg Communications, purchased $200 million dollars worth of wireless spectrum in 2008. It is set to compete against the big three incumbents, who continue to aggressively invest and expand networks in the region.

Although critics have said Eastlink has taken too long to launch its wireless services, their CEO disagrees:

“There is no tremendous speed-to-market advantage for us,” Eastlink chief executive officer Lee Bragg said. “We’re moving into a market that is already dominated by some big players. … It is more important to do it right.”

One advantage Eastlink has over newer wireless entrants is the fact its network will have 4G LTE to enable customers a larger and wider selection of smartphones. Their initial line up will include the Sony Xperia T, Samsung Galaxy S III, LG Nexus 4, and the BlackBerry Bold/Curve (Z10 and Q10 coming next month). The iPhone will not be offered.

The Chronicle Herald reports Eastlink is the first carrier in Canada to build a single-tier wireless network to support 3G and 4G LTE. Bragg and Eastlink Wireless president Matthew MacLellan says their investment “changes the game”:

“It means that whether you’re in Halifax, Truro, New Glasgow or Oxford, you’re covered on the LTE network and enjoying the same speeds and capabilities, no matter where you are,”

Below is the Eastlink wireless network coverage map at launch (via The Globe and Mail): 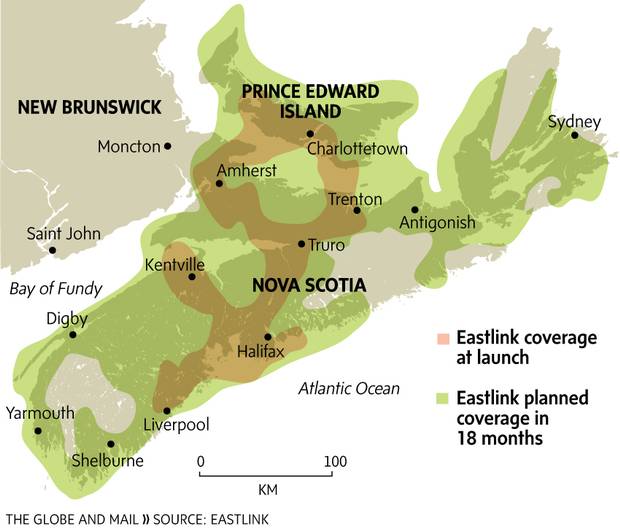 As for subsidies on devices, Eastlink will bypass traditional term contracts and rather go with device tabs, taking a page from TELUS. Their new “easyTab” means customers pay for a portion of their smartphone up front, then 10 per cent of monthly bills will contribute to pay off their outstanding ‘easyTab’; remaining balances will be cleared after three years. MacLellan goes on to say this is what customers have asked for when it comes to wireless services:

“We’ve listened to customers, and what customers have been telling us is they want a cellphone provider that’s going to give them a high-quality network, great data speeds, fair pricing and no contracts. That’s all here.”

Eastlink plans to lure customers to its wireless network through bundles, where existing customers will get discounts for subscribing to multiple services; Bell currently uses a similar strategy in the region.

Retail expansion is planned at 6 to 9 new locations in the next year and half. Eastlink stores in Nova Scotia and PEI will start to roll out wireless products over the next couple weeks, but customers in Halifax can sign up on the network during Friday’s launch.

Eastlink has continued to expand its services for customers as of late. In December, Eastlink released their To Go iOS app to allow customers to stream live TV from their iPhone or iPad, powered in part by the the company’s partnership with Cisco Canada.

Update: For a detail list of plans and handset pricing, MobileSyrup has obtained them.