Bell announced yesterday it had acquired Quebec’s largest independent internet service provider, EBOX, which also operates in parts of Ontario. The announcement came as a shock to some, and now the former chair of the CRTC, Jean-Pierre Blais, is speaking his mind about the news.

Responding to Gaby Abou Merhi, a Vice President of corporate finance at PwC that helped facilitate the Bell-EBOX deal, Blais said on LinkedIn, “a lot of consultants will make money from this. But it is sad news.” 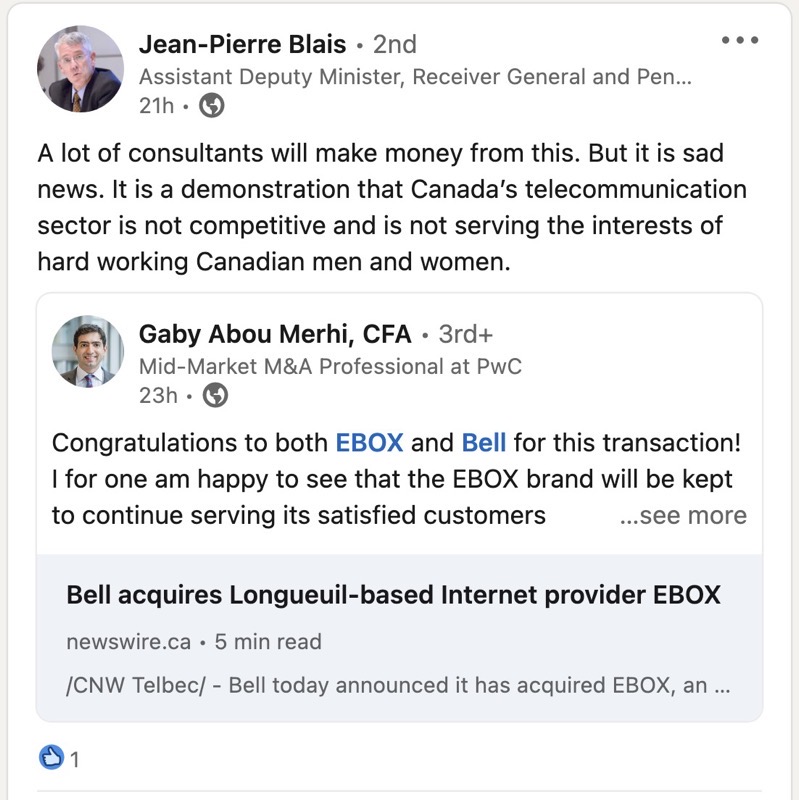 “It is a demonstration that Canada’s telecommunication sector is not competitive and is not serving the interests of hard working Canadian men and women,” said Blais.

Blais also responded to Jean-Philippe Béïque, the CEO of EBOX, replying to the latter’s LinkedIn post about the deal. The former CRTC chair reiterated, “very sad. Another example that the competitive framework in the telecommunications sector is failing hard working Canadian men and women.”

Gerry Frappier responded to Blais with, “those big players who spend billions to create telecommunications infrastructure should be compensated how Jean-Pierre? At some point, government policy can’t be about vouloir le beurre et l’argent du beurre,” referring to the French butter proverb.

Blais then replied, “there are big players who don’t actually compete on price and quality. They instead use their deep pockets to [crush] small players in the courts to delay competition. Or to buy up competition to remove them from the marketplace. Or worse, to have inappropriate meetings with regulators to always have it their way.”

“Winning by lobbying is not a healthy marketplace. You were part of the problem so [don’t] now purport to be part of the solution,” said Blais.

Blais, a former lawyer, was appointed chair of the CRTC back in 2012–a position he held for five years–and never minced words about telecom players and practices of the latter.