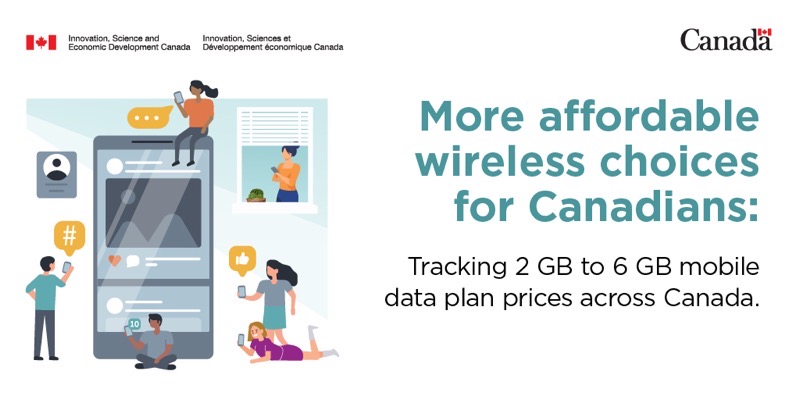 Innovation, Science and Economic Development (ISED) has released its latest quarterly report, tracking the prices of 2GB-6GB data plans from Canada’s wireless carriers, for the period July to September 2020.

The price tracking is part of the federal government’s goal to seek “affordable, accessible and 25% cheaper over next 2 years!”, says ISED.

Affordable, accessible and 25% cheaper over next 2 years! That is the #GoC’s commitment to high-quality telecom services for Canadians. Check #yourmobile pricing data for July, August and September: https://t.co/5vXtkIGZYv pic.twitter.com/MO2BJcnq6S

It’s unclear how tracking these prices will actually force wireless carriers to lower prices to meet the government’s price target. ISED says there were “more affordable 4 GB and 6 GB plans were available in certain provinces,” noting Quebec had the lowest pricing for 2GB of data, most likely due to regional competition from Videotron versus the Big 3.

A recent federal government email obtained by The Wire Report says any price changes are expected to happen organically.

Analyst Margarete Ling with the Privy Council Office (PCO) wrote in an email, “ISED estimates the commitment of a 25 percent price decline per gigabyte (GB), over the course of the mandate, will occur organically without intervention beyond measures the government is already taking and therefore, continuing with status quo measures is expected to achieve the desired result.”

“In this sense, prices are declining organically. However, at the same time, consumption continually increases. Canadians no longer want the lower GB plans. Therefore, it is unlikely that price/GB reductions will result in the promised $1,000 a year savings,” said the email.

What do you think of ISED’s wireless price tracking for 2GB to 6GB plans? The federal government says price changes are expected over the “next two years”.