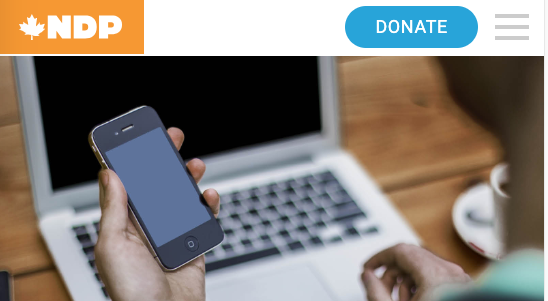 The federal NDP has unveiled their plan to help Canadians save money on wireless and internet, with leader Jagmeet Singh outlining the details with CTV News.

According to the NDP plan, they want to:

Singh said both the Liberal and Conservative governments have failed to target Canada’s “big five” telecom giants but the NDP will be up to the task.

The party put forward a motion today sponsored by NDP Member of Parliament from New Westminster—Burnaby, Peter Julian, arguing for the government to adopt its plan, immediately. The full text of the motion can be seen below:

That, given telecommunication services in Canada cost more than most other countries in the world, leaving far too many Canadians with unaffordable, inadequate or no service at all, the House call on the government to implement measures that will make those services more affordable, including: (a) a price cap to ensure every Canadian saves money on their bill; (b) abolishing data caps for broadband Internet and mandating that companies create unlimited data plans at affordable rates for wireless services; (c) putting an end to egregious and outrageous sales and services practices through a Telecom Consumers’ Bill of Rights; (d) revisiting the structure of the spectrum auction to make sure everyday Canadians benefit most from the revenue, rather than repeating the failures of previous Liberal and Conservative governments, which squandered almost $20 billion from previous auctions; and (e) directing the Canadian Radio-television and Telecommunications Commission (CRTC) to reverse their rural and remote broadband implementation policy, which condemns these areas, including many Indigenous communities, to years of substandard broadband and wireless services.

Here’s an excerpt from the NDP’s press release, with Singh saying “Canadians pay some of the highest prices for mobile wireless and broadband subscriptions. Telecom companies are making billions of dollars on the backs of Canadian families. It doesn’t have to be this way.”:

The profits of the “Big Five” telecom companies in 2017 totalled $7.49 billion and their profit margins have reached 38.3 per cent. Despite these astounding profits, Bell, Rogers and Telus received close to $50 million in subsidies and more than $700 million in contracts from Justin Trudeau’s Liberal government. The Liberal government continues to put the profits of these rich telecommunications companies ahead of people.

“In this market, Canadians are being forced to pay more than $20 more than the average monthly prices of other OECD countries,” said NDP Critic for Innovation, Science and Economic Development, Brian Masse. “Canadians deserve a government that has the courage to stand up to the rich telecommunication companies and to use every tool available to make life more affordable for people.”

Definitely, an aggressive plan by the NDP to attempt to take on Canada’s telecoms, ahead of this fall’s national election. As for any of it actually working, that’s up for debate.