Roam Mobility CEO and founder, Emir Aboulhosn, has just emailed customers to apologize for the ‘growing pains’ the company has experienced this summer, specifically long customer service wait times of over one hour and unanswered emails that went on for weeks.

The CEO says the company is increasing staff by over 40%, “effective immediately”, which will continue to have their customer care support team located at their head office in Richmond, BC. 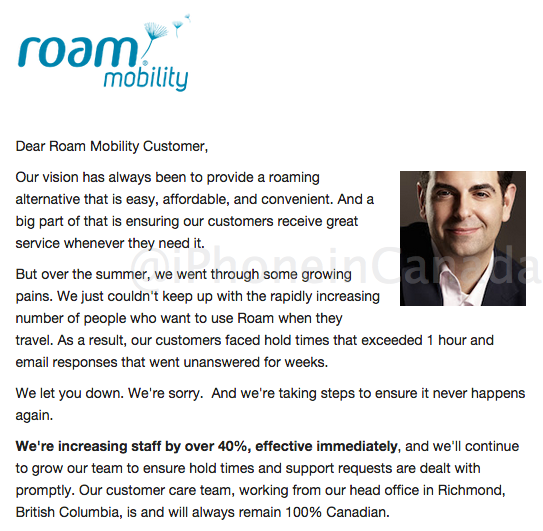 On top of this, the company is giving away 33% more 4G LTE data on all of their Talk+Text+Data plans, to make up for the poor customer experience this summer:

Starting today we’re increasing the daily MB allowance of 4G LTE service by 33% at no extra charge on all Talk+Text+Data plans* purchased until December 31st. That means you’ll get 400MB per day instead of 300MB per day.

That’s 12 GB per month of 4G LTE service – 2X more than the biggest carriers and 12X times more than the smaller carriers. It’s our small way of making up for the inconvenience you may have experienced recently.

Nice move. We’ve heard from you guys this summer as well about Roam Mobility’s lacklustre service. It’s nice to hear changes are coming for the better.

You can click here to see plans from Roam Mobility.