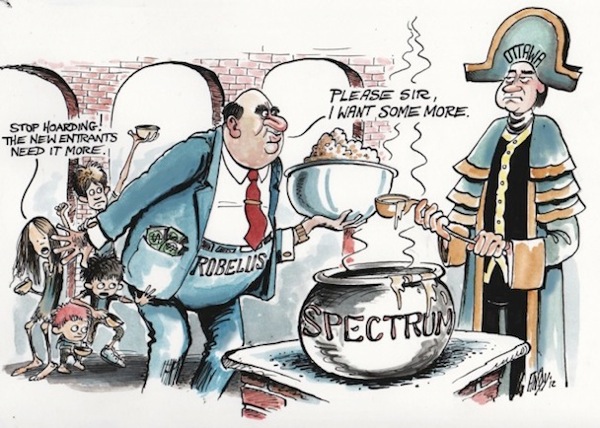 2013 looks to be the year wireless competition could continue to heat up in Canada. The upcoming auction for the coveted 700MHz wireless spectrum brings some advantages to our new wireless entrants WIND Mobile, Mobilicity and Public Mobile, which looks to turn the heat up on incumbents Rogers, TELUS and Bell.

According to Peter Nowak, in his piece over at Yahoo! Finance:

In the upcoming auction, new players clearly won’t be handcuffed by complicated and onerous rules regarding their corporate structures.

The auction framework itself will give new players something of a leg up too, in that big incumbents will be capped at buying only one of four licenses in each geographic area. Newer carriers, if they choose to outbid Bell, Rogers and Telus, will be allowed to purchase two.

While the cap system isn’t as advantageous as the complete set-aside the newcomers were hoping for – a scheme that would have precluded the big three from bidding on entire blocks of spectrum – it does ensure they’ll end up with at least one license in each area.

One potential barrier is the cost involved to purchase spectrum and whether the newer entrants will want to pay big money. If they want to compete against Rogers, TELUS and Bell, starting their own 700MHz spectrum is key as it’ll offer better range and coverage, and allow for newer smartphones. Ottawa last year announced it would allow foreign ownership of wireless companies with 10% marketshare or less–so this could ideally introduce further foreign capital to the newer entrants.

Essentially, this time around newer wireless entrants have a chance to further disrupt the Canadian mobile industry. We’ve already seen their effect so far and the ‘Big 3’ have offered competitive unlimited Canada-wide voice plans and caused some to eliminate activation fees. The CRTC has also stepped in and is set to create a national wireless code of conduct, after consulting the public.

WIND, Mobilicity and Public Mobile should be smart and share any new wireless network (akin to Bell and TELUS collaborating on their shared HSPA+ network). Previous rumours stated WIND Mobile was in talks to acquire Mobilicity, so the idea isn’t far off. Last February, WIND and Public Mobile stated they desire the coveted 700MHz spectrum to expand their networks and allow for newer and better smartphones, like the iPhone 5.

Competition is a good thing for Canadian wireless users. Many feel trapped by the identical plans and pricing offered by Rogers, TELUS and Bell. Once newer wireless entrants are able to build their networks to support the iPhone–it’ll be game on.

The Federal government is expected to announce a date for the wireless auction in the first half of 2013.

Here are the latest Canadian cellphone plan and device deals, plus other promos from wireless carriers such as Rogers, Telus and Bell, from our partner PlanHub. As always, the promos may change at the last minute, but here they are as of Wednesday, September 28, 2022. Check them out below… Bell Noticeable price changes: Get a […]
IIC Deals
15 hours ago

The Canadian Radio-television and Telecommunications Commission (CRTC) wants feedback from Canadians on the proposed price increases on basic TV packages, beyond mandated price caps. The CRTC said on Wednesday the request for comments comes “in response to an application filed by a group of television service providers to increase the price cap for the basic […]
Gary Ng
20 hours ago