Chatr, the prepaid brand from Rogers, has launched its own account management app this morning for iOS and Android users, similar to the company’s other apps MyRogers and Fido My Account. The company said in an email this new My chatr app is the “easiest way for chatr customers to access their account with a few simple taps.” 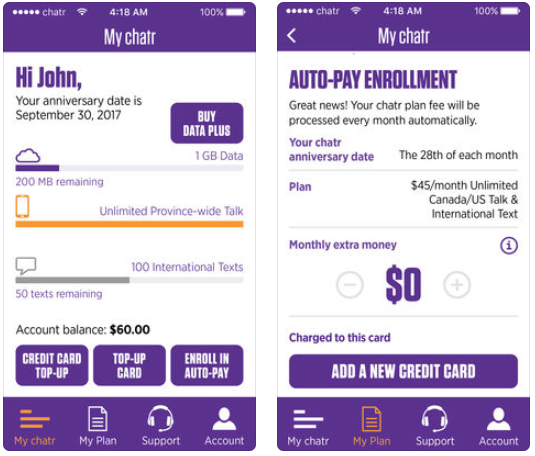 Here’s what the app can do:

– Top up your account in just a few simple taps
– Get quick access to manage your account at any time
– Monitor your usage: data, minutes & text messages
– Check your plan details including your anniversary date and balance
– Enroll in auto-pay using a credit card
– Quickly add more data when you reach 75% or 90% of your data limit
– Find chatr locations nearest you

According to a Rogers spokesperson via email, “chatr customers can download the My chatr app by texting mychatr to 4989 or visiting the Google Play or App Store.” The app requires iOS 8 or Android 5.0.

This new chatr iOS app has been optimized for iPhone X users at launch, which is nice to see. It’ll be interesting to see if Bell launches an iOS app for their prepaid brand Lucky Mobile, and if Telus will do the same for Public Mobile (although unlikely since the Koodo iOS app was axed).